We drove straight to Algarrobo from the hotel and we were the first to arrive! A few warblers flitted about in the bushes we saw Willow and Sardinian Warblers, a few Spotted Flycatchers and Common Redstarts. But it was the sky that held the most interest for us, even as soon as 8:30am we saw groups of Honey Buzzards rising from the woods and circling on thermals, gianing some measure of height before they moved on towards Tarifa. It was amazing these birds were soaring directly above and came up in ever increasing numbers.. Before 9:30am we had seen over 300 Honey Buzzards, a few Black Kites and a dozen or so of Short-toed Eagles. 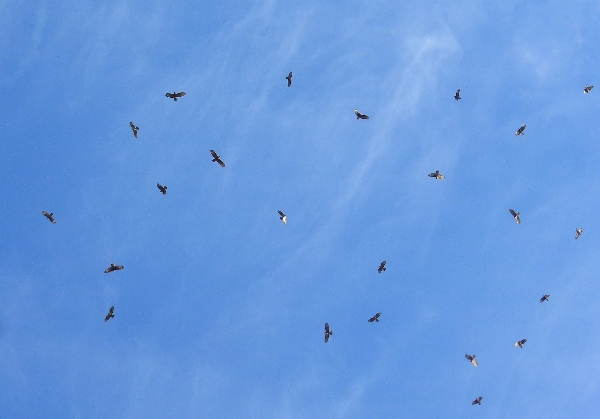 The official raptor recorders arrived but the numbers of Honey Buzzards dropped for a while, so we concentrated on sightings in the bushes as we watched more flycatchers and redstarts. An Osprey came over, a few small groups of Griffon Vultures circled above the hillside and the odd one or two Eurasian Sparrowhawks flew over. We heard Bee-eaters but failed to see them and hundreds of hirundines filled the sky. More honey Buzzards began to emerge as we departed around 10am.

A track leading to El Bujero natural park was our next destination, we scoured the scrub and bushes in an open area looking for migrant birds where we found both Spotted and Pied Flycatchers, Willow Warblers and a small colony of Monarch Butterflies, as is the case all over this part of Andalucia the numbers of Monarch Butterflies on the wing is way down, we saw a single individual. 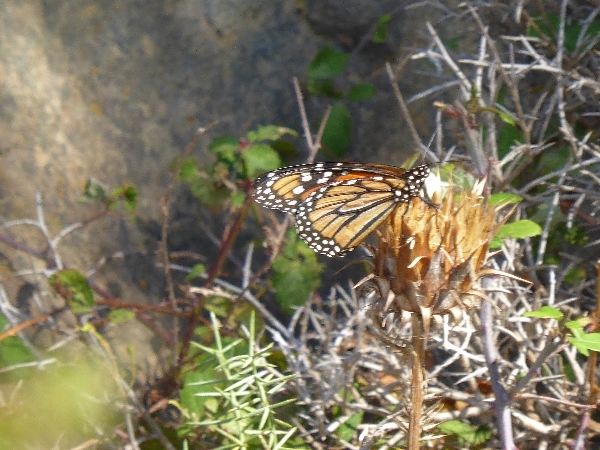 We caught our boat at the Port in Tarifa and set off for our exciting whale watch cruise at 12:30. We had a fantastic time despite bird sightings being low we enjoyed some incredibly close Bottle-nosed Dolphins, also Pilot Whales and on the return journey some Common Dolphins. Bird sightings included both Cory's and Balaeric Shearwaters, a flock Black Terns, a single Storm Petrel, a single Mediterranean Gull and several Yellow-legged Gulls. It was great being out there today, the sea was fairly calm, the temperature was lovely and air was clear. We cruised close to Morocco in search of Orcas that were seen yesterday by a lucky group but we couldn't find any. 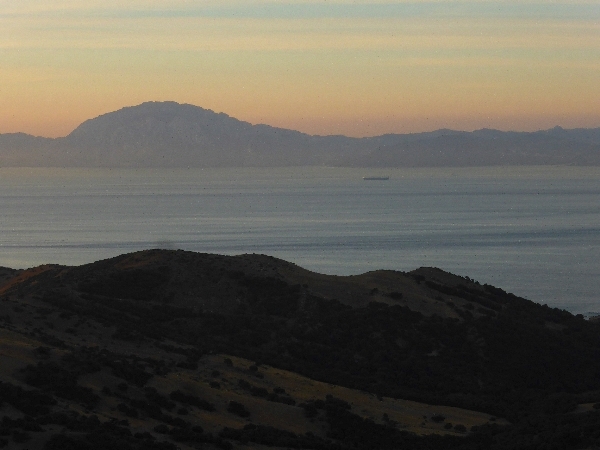 Our cruise ended at 3pm we drove out of Tarifa and headed to Barbate Marshes natural Park, a nice breeze kept the heat down as we enjoyed some excellent birding on terra firma. Thousands of gulls roosted on the islands and raised banks of this huge natural park, the open lagoons provided shelter for many species during high tide periods. We saw over 300 Audouin's Gulls with countless Yellow-legged and Lesser Black-backed Gulls, there was also good numbers of Greater Flamingos and we found 19 Stone Curlews, a few Kentish Plovers, two Greenshanks, Ringed Plovers and a dozen Black-winged Stilts. 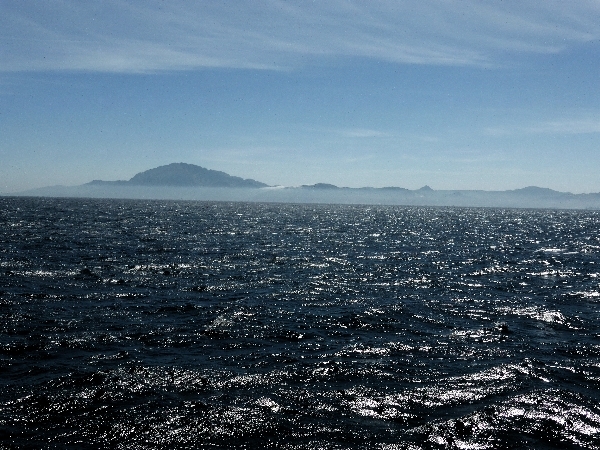 Africa from the boat

The scrub and rocky hillsides around the natural park held some nice birds, we saw Woodchat Shrike, Northern Wheatear, Crested Lark, Common Stonechat a Little Owl and a huge flock of some 200+ Calandra Larks,

We made our way to the bridge over the Rio Barbate and parked on some scrubland from where we could scan a huge open area of salt marsh and the river. It was still high tide so no muddy margins were visible, we saw a few waders but not many. Common Redshanks, Black-winged Stilts was all we got, also a couple of Sandwich Terns, a Marsh Harrier but not the expected Caspian Terns.

So we left the area and drove directly to the hotel arriving around 7pm. in good time for our 8pm dinner on the terrace.