WEATHER: nice temperature all morning with a breeze, very hot in the pm. Top temp 34C

Our final full day went out with a fizz rather than a bang, we had several target species to see and missed all of them, we had a couple of bonus birds for compensation! The morning walk along the boardwalk at Los Lances was nice, I always enjoy that one. We went over there straight after breakfast and walked as far as the beach hide before returning to the hotel. 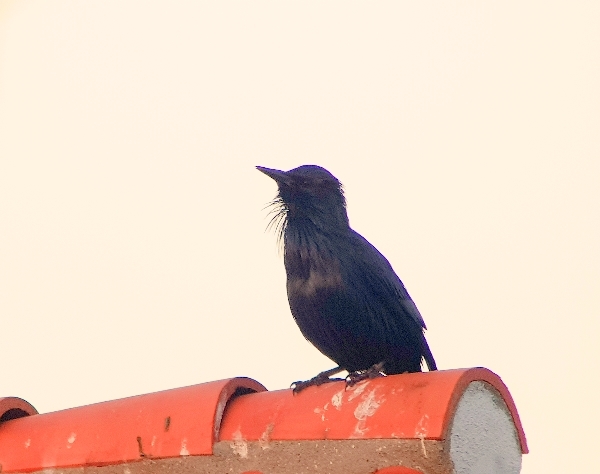 We watched the Spotless Starling for a while, singing away as though nothing was wrong in the world! As we walked to the beach area we noted the usual Stonechats, Corn Buntings, flocks of Spanish Sparrows, a few Zitting Cisticola and Goldfinches. From the hide we watched the wader flocks, some were feeding very close to the hide and included Dunlin, Curlew Sandpiper, Red Knot and Ringed Plover. Looking further afield we noted a few Audouin’s Gulls, small flocks of Sanderling, a few Kentish Plover, Little Egrets, grey Herons, Redshank and a couple of Common Sandpipers. 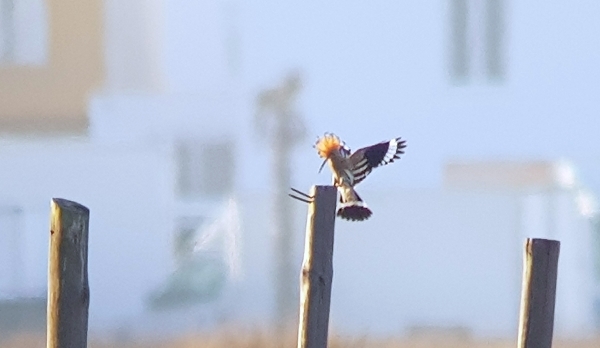 very distant but unmistakable, the Eurasian Hoopoe moved from pillar to post

A Hoopoe worked its way along a fenceline, a few Cory Shearwaters skimmed the sea and a very small numbers of Sandwich Terns joined the Yellow-legged Gulls flying up and down the waterline. The only raptor we saw was a Common Kestrel, other birds in the sky were either Barn Swallows, Sand & House Martins or Pallid Swifts.

After a brief return to the hotel to drop off Cindy and Janet, the rest of us set off for Tarifa and the whale watching excursion. Parking in a car park on the edge of town we heard a distinctive loud call, I recognised it at once as a Common Bulbul. In fact two were calling from a eucalyptus wood just beyond the car park fence. We heard them several times but never got to see one, what a bonus. 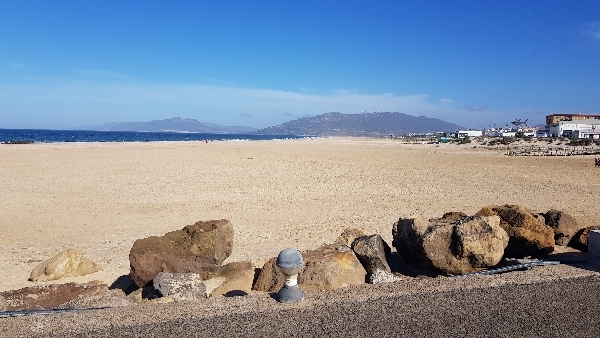 Our ‘pelagic’ trip last two hours and was very disappointing as far as bird sightings was concerned, we saw very little out there. Our sum total was: two Gannets, four Cory’s Shearwaters three Barn Swallows and lots of Yellow-legged Gulls. Cetacean sightings were very popular with the group we saw several pods of Pilot Whales and a pod of Bottle-nosed Dolphins, also half a dozen Sunfish went drifting by. 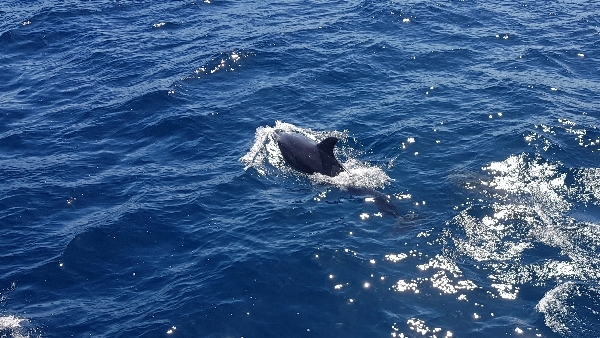 a Pilot Whale, one of several seen on the pelagic trip

It we 2:30pm when we got back to the hotel, we dropped off Joe and collected Cindy and Janet. Pil loaded his luggage onto the bus as he was leaving later in the day. We drove to Soto Grande some 45 minutes along the coast towards Malaga. A small Laguna called Torreguadiaro held a good amount of water but very few birds. It is a great place to find Little Bittern, but not today! It was 32C as we stepped out of the bus with no breeze, we had left the Tarifa breeze behind! We saw a single Moorhen and two Little Grebes, but that was it. 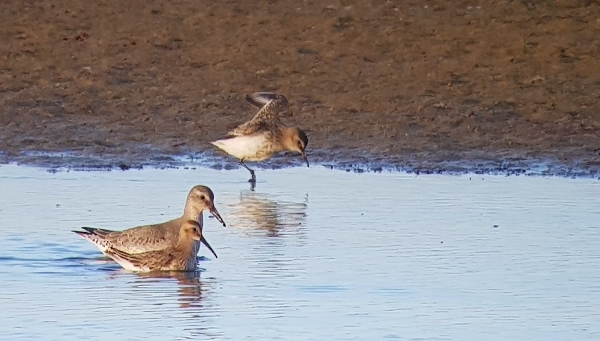 Driving to Soto Grande Marina we parked at the far end of the sea wall which gave us excellent views out to sea. This is a good place to watch Shearwaters from, but today they were far out and we only saw Cory’s and not the expected Balearic Shearwater, another dip!

Close by are the White Popular woodlands of San Enrique where a small colony of Tree Sparrows breed so we went there looking for them. It was now 34C with no breeze. We saw very little at the woodlands, Spotted Flycatchers, House Sparrows and a Great Spotted Woodpecker. The woods are adjacent to the Rio Guadiaro so we ad a quick look at the river. We saw Little Ringed Plovers, a Kingfisher and a Common Sandpiper. No Tree Sparrows were seen, our third dip of the day.

Finally we drove to Alcadeisa on the way back to Gibraltar, a small colony of White-rumped Swifts can be seen there. We staked out a good viewing place near the Faro (Lighthouse) and watched the sky for a while. We did see several swifts, but they we all Pallid, we also saw Barn Swallows, Booted Eagle, a Montagu’s Harrier and a Honey Buzzard.

It was now 6pm and we had to get Phil to Gibraltar to catch his evening flight. It took 20 minutes to get to Gib Airport and then 45 minutes to get back to the hotel. It was a bit of rush to get ready for our 8pm dinner but we all made it. Everyone was in a reflective mood as we talked of the birds we had seen and the experiences we had enjoyed together. It was a lovely dinner, a nice occasion and great company. Tomorrow is our final day, we have the morning to do some birding before making our way back to Malaga for late afternoon flights.