WEATHER:  wall to wall sunshine, slightly lower temperature because of a misty start, hotter later but with a nice breeze.

What a superb day we had today plenty of variety as we visited a golf course, a river estuary, open lakes, a cliff-side raptor watch point, a wooded nature trail and an open farm track.

I have such a lot to tell you especially about the raptor watch point as we had an unbelievable few hours there. But first we started at the Golf Complex some 25 minutes from our hotel, a quick look at a regular roost sight for an Eagle Owl proved pointless because we were looking into hazy sunshine. However, the golf course provided sightings of Jackdaws, Cattle Egrets, a single Melodious Warbler, Chaffinches and a lovely pair of Little Owls. 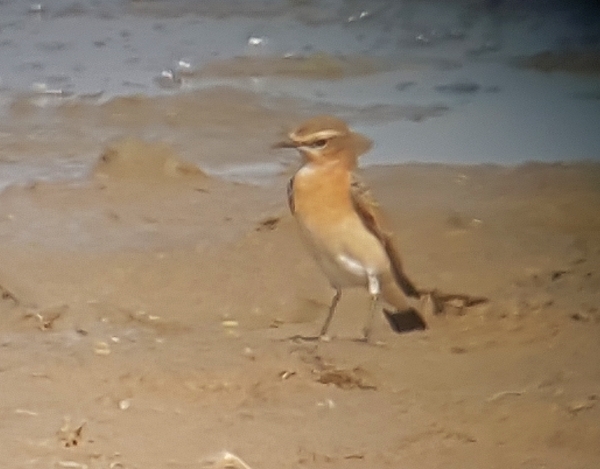 We spent about 3 hours at Barbate Marshes and the river Barbate estuary. At the estuary it was high tide but we still found several new species for our list. Black-winged Stilts, Whimbrel, a single Ruff and a superb adult Slender-billed Gull. A fly over Golden Oriole was a nice find and our second Osprey of the trip disturbed all the gulls, we also logged our first Sandwich Tern there.

The marshes held 2-3 thousand gulls, hundreds of waders, herons, egrets and Greater Flamingos. We counted 86 Audouin’s Gull in one group and a single Mediterranean Gull sat with them. The majority of the other gulls were Yellow-legged but many Lesser Black-backed and Black-headed Gulls made up the numbers. 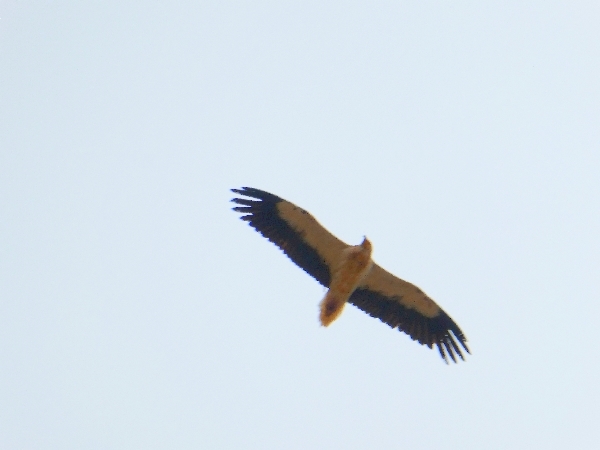 A few migrant passerines were seen on the fence-line around the main lagoon, Woodchat Shrike, Northern and Black-eared Wheatears, Yellow Wagtails (flava), Eurasian Hoopoe, a single Tawny Pipit and our second Melodious Warbler. A group of 12 Bald Ibis flew over the lagoon but we never had good views of them. Our second pair of Little Owls sat out obligingly. 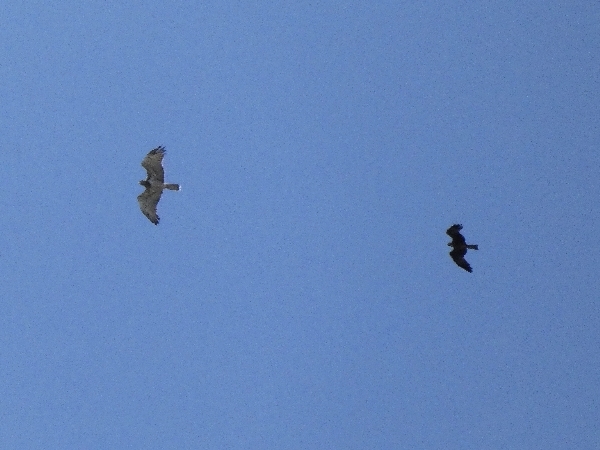 Short-toed Eagle and a Black Kite

As we left the marshes we noticed a large flock of larks on the brow of a hill, they frustrated us because they kept landing just out of sight, but we were quite sure that they were Calandra Larks. A couple of Montagu’s Harriers were also noted in the distance.

A brief search for more Bald Ibis lasted 2 minutes as we discovered two in a small cow paddock, they showed extremely well.

It was 12 noon when we set off back to Tarifa, we wanted to eat our picnic lunch at the Raptor Watch Point called Trafico which is situated just east of the town.

We had a terrific time there with an unbelievable number of birds passing over us. There were great clouds of Black Kites (5,000+), swarms of Bee-eaters (groups of 50-100), huge Kettles of White Storks (1,000+) and dozens and dozens of both Short-toed and Booted Eagles, Egyptian Vultures and we also saw about 20 Eurasian Sparrowhawks. 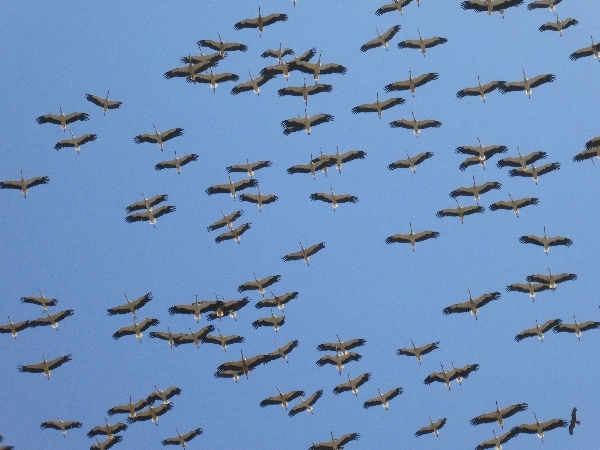 We knew that a very large passage of Honey Buzzards had occured earlier but we had seen over 1000 of them yesterday.

We had tremendous views of all the passing birds in superb afternoon light, I think my group were stunned by the sheer numbers, they all had neck-ache, that’s for sure. We managed to eat our lunch during one of the slower periods and left the site around 4pm. 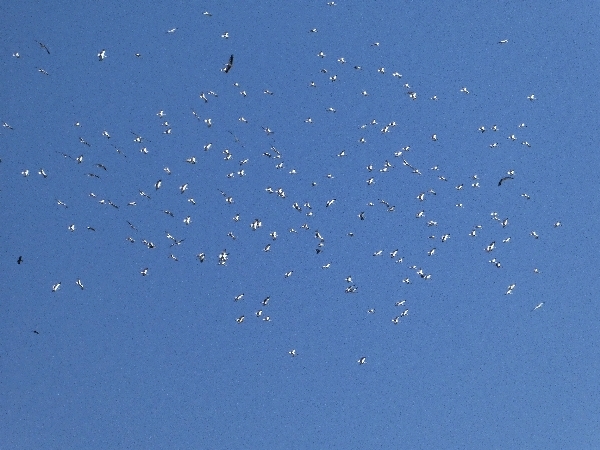 After a brief stop at the Café/Restaurant called the Mirdaor de Estrecho where most of the group had an ice-cream or a coffee or both, we drove into Pelayo to visit the private nature reserve called Huerte Grande. The reserve was closed but we walked a couple trails and added a few birds to our list. A Firecrest was nice to see, we also logged Long-tailed Tit and European Robin.

Our last port of call was the Ojen Valley found near Tarifa, the approach road to the valley passes through very large open paddocks where many Common Stonechats sat the wires, a flock of some 20 Bee-eaters were seen in flight and our first Corn Buntings of the trip were noted, hooray!! 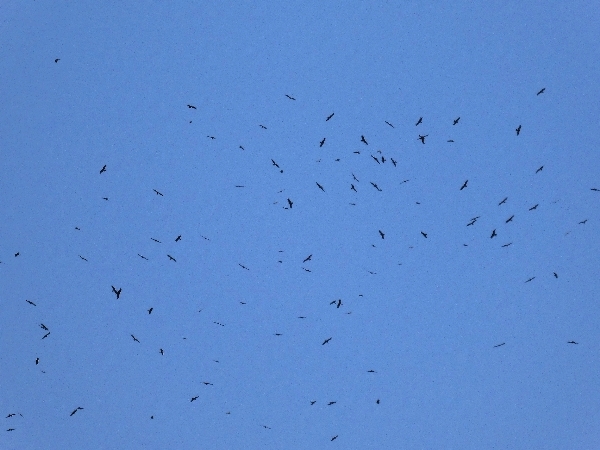 We stopped near a stream where we hoped to find a few warbler and perhaps a selection of butterflies. Monarch Butterfly, Speckled Wood, Meadow Brown, Holly Blue and Large White were all on the wing. We notched up a couple of Sardinian Warblers and a brief sighting was made of a Nightingale. 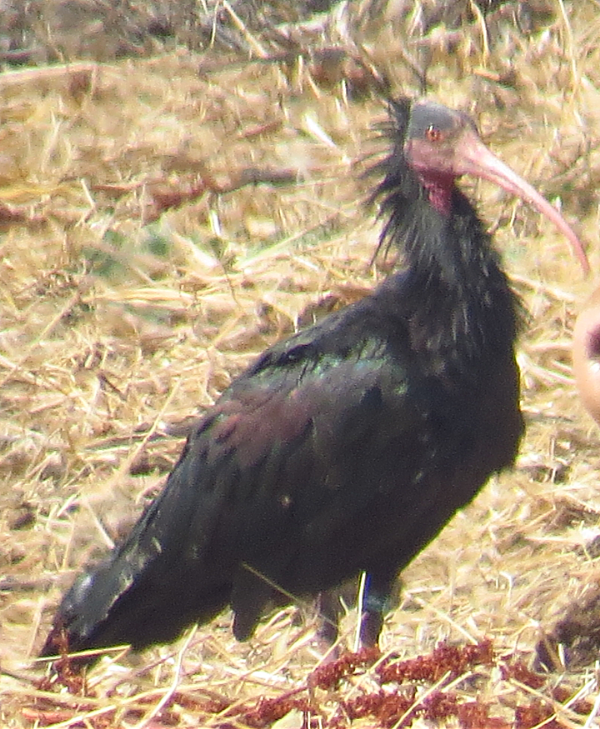 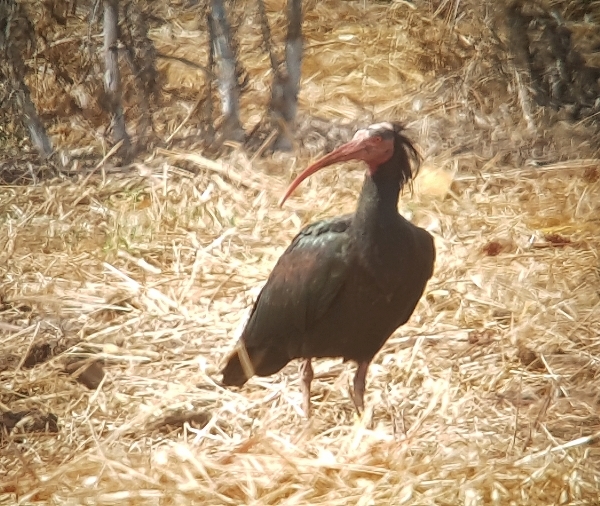 not the most attractive of birds - Bald Ibis

The late afternoon light was simply divine, the sky was still full of raptors and a lovely breeze kept us cool. We saw plenty of the following: Griffon & Egyptian Vultures, Short-toed and Booted Eagles, Black Kites, Montagu’s Harriers and good numbers of Barn Swallows, Red-rumped Swallows, Common Swifts, House Martins and a single Crag Martin. We added Striped Grayling to our butterfly list just before we went back to the hotel at 6:30pm.