WEATHER:  cloudy at first, cleared around 1pm, nice cool temperature until then.

We had an absolutely fabulous day today,  it was wall to wall birds with some great sightings and a massive list of 99 species. A can’t think of anywhere else in Europe where your birding list for a day out would include: Marbled Duck, Ferruginous Duck, White-headed Duck, Garganey, Red-knobbed Coot, Red-necked Phalarope, Little Swift and tons of other goodies. 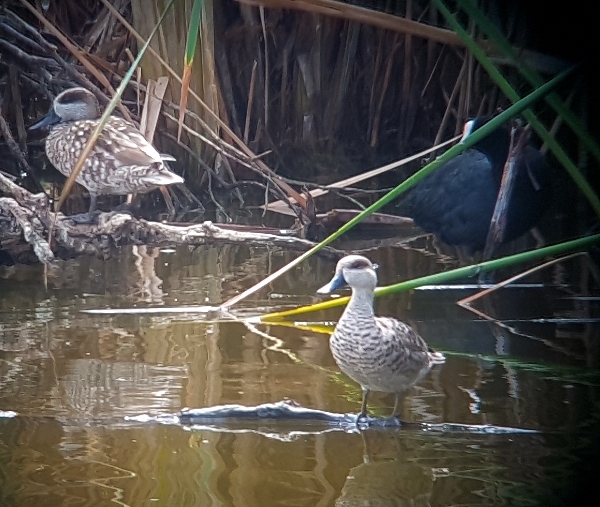 a couple of the Marbled Duck at the Sanlucar 'Ponds'

We only visited half a dozen sites and they all turn up trumps and offered up their treasures willingly. Even the number of birds seen were in epic proportions, at Laguna Medina we estimated, by extrapolating from counting a small section of birds on the water, that there were between 6 and 7 thousand birds there! Admittedly most of the waterfowl were either Mallards or Eurasian Coots but just look at this list of other species we found there:  Ferruginous Duck (12), White-headed Duck, Common & Red-crested Pochard, Northern Shoveler, Eurasian Teal, Gadwall, Northern Pintail, Great Crested, Little & Black-necked Grebes, Greater Flamingo, Glossy Ibis, Squacco Heron, Purple Swamphen, Common Moorhen and Black-winged Stilt. That’s just the list of birds on or in the water we saw another 15 species in the scrub! 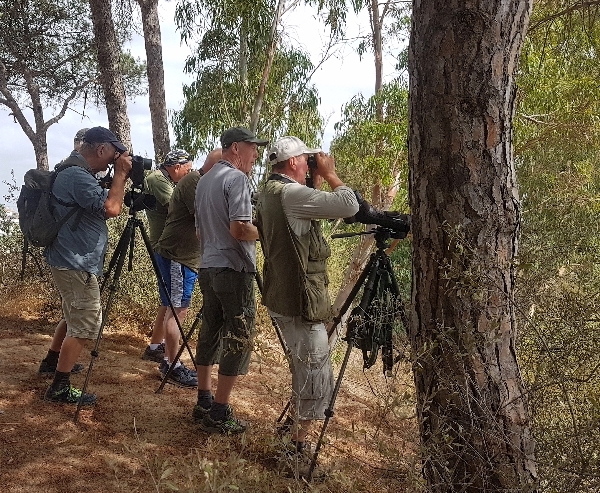 At Laguna Juncosa the water level was very low and the reeds were very high so we had to climb up a sandy bank to view the pool properly. It too was full of birds we found an interesting mix of species and some good waders for our day list. We found 12 species of waders on this very small stretch of shallow water, including; four different Sandpipers: Wood, Green, Common and Curlew Sandpipers, also present were: Pied Avocet, Black-winged Stilt, Ruff, Common Snipe, Little Stint, Dunlin, Greater Ringed & Kentish Plovers. With Purple Swamphen, Common Moorhen, Eurasian Coot, Yellow Wagtail and Glossy Ibis. 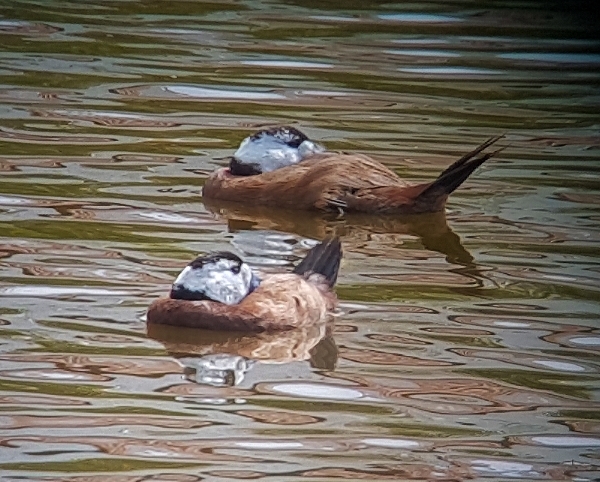 We stopped off in Sanlucar to buy our picnic lunch before driving on and parking adjacent to one of my favourite pools, it always produces the goodies and today it was exceptional. Trying to hold a sandwich and manoeuvre your scope is tricky but when you have just found a group of six MARBLED DUCK, a LITTLE BITTERN and three Squacco Herons its hard to stop for lunch! Within half an hour we had found two other Marbled Duck, several Purple Swamphens, a juvenile Night Heron, a female Garganey and a dozen White-headed Ducks. 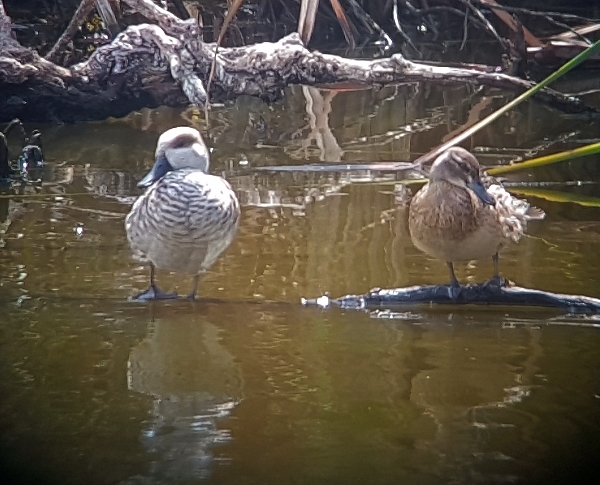 Marbled Duck with the Garganey

A sister lake/pool just across the road produced similar species with no additions to the list, only Black-winged Stilts were able to feed in these deeper pools. The third pool is much bigger and held a large Little Egret roost with about 50 birds present including a few more Night Herons. But it was there that we found a male RED-KNOBBED COOT, wow! Here we go again, the superlatives just dribbled from our mouths, fantastic, oops there goes another one!

We finally made it to the Salt Pans our notebooks heavy with a long list of birds weighed us down somewhat. But we managed to add a dozen or so more over the next two hours. A couple of CASPIAN TERNS sat on a bank in the distant, dozens of Slender-billed Gulls fed on brine shrimp picking them off from the surface of the water, posing just like the pictures in the guide book. 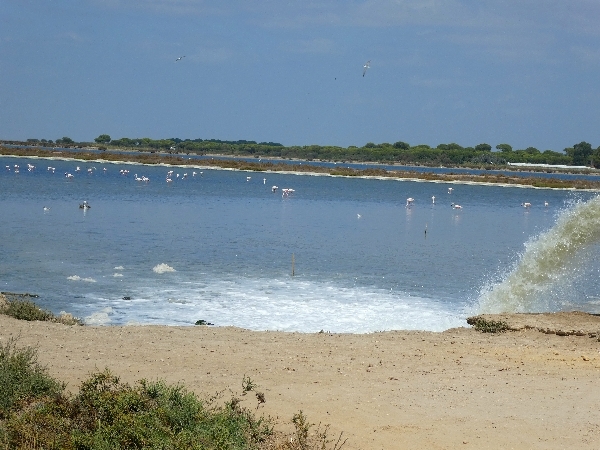 one of the many salt pans at Bonanza

Then one of the group found, not one, but two RED-NECKED PHALAROPES, wow, just when you thought your day couldn’t get any better, it did! We went on to find Little Terns, Curlew, Whimbrel, both Black-tailed and Bar-tailed Godwits, Ruddy Turnstone, Redshank and lots more waders already mentioned. There must have been 700 Slender-billed Gulls, a thousand Greater Flamingos, countless waders.

A few raptors also went onto the list  at or near the pans; Osprey, Red Kite, Booted Eagle, Short-toed Eagle, Black Kite and Kestrel.

Laguna Tarelo gave us nothing new but there was plenty to see there, especially another 10 MARBLED DUCK and an amazing count of 37 Little Grebes, many of which were feeding like a group of gulls in a feeding frenzy on top of the water, most peculiar behaviour. 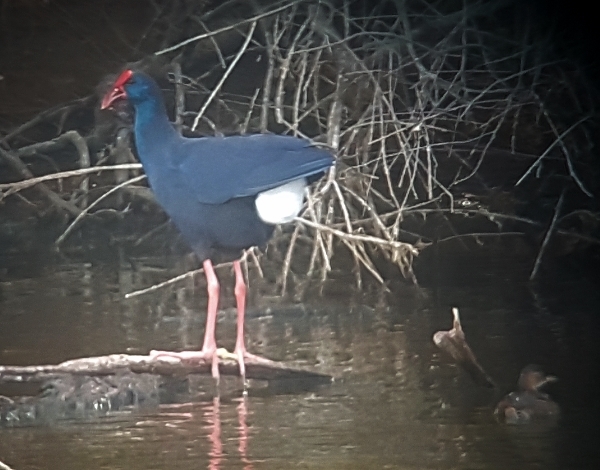 We set off at 3:30pm for our last destination of the day, Chipiona sea-front, which is the site of the breeding colony of Little Swifts. It took 30 minutes to get there and five minute to find the swifts. We saw half-a-dozen visiting their nests in the usual building, a marvellous species to end the day with.

We had time for an ice-cream which we ate sitting on the sea-wall overlooking the beach, we found Sandwich Terns, Ruddy Turnstones and some Yellow-legged Gulls on the rocks.

It was 5pm when we set off back to hotel, another two birds were added to the list on the way back, bring our day total to an impressive 99 species! Only 3 behind my long-standing record for this day trip.

A lovely dinner was enjoyed at 8pm where various opinions were expressed about which bird should be bird of the day.