WEATHER:  another sun-filled hot day, at times we had a nice breeze but other times it was hot, around 30C

We made a mish-mash of sightings as we went chasing about 15 species in the hills and the mountains away from the coast. We started at the Palmones River, parking right down near the beach from where we scanned the sand banks and muddy shoreline at low tide.

A selection of waders were on show but no gulls or terns sat on the sand-banks, we saw Kentish & Greater Ringed Plovers, Redshank, Greenshank, Sanderling and Dunlin. Not even an Osprey sat on the available posts, however,we did see lots of Honey Buzzards, about 50 went over us and more could be seen in the distance. In fact, it was another epic Honey Buzzard passage with over 12,000 being counted over Algorrobo Watch-Point!! We missed those of course as we made our way inland via San Roque and San Pablo, in between the two towns we drove along the Marchenilla track where we enjoyed sightings of many species. 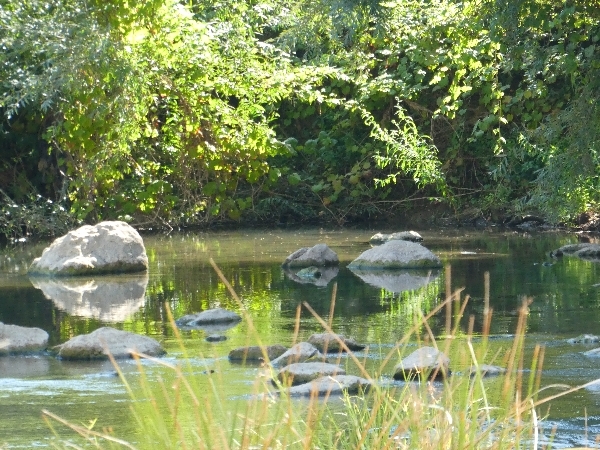 The Rio Guadiaro - taken by Dawn

Southern or Iberian Grey Shrike was on our ‘wanted’ list, we quickly found one, as well as Woodchat Shrike, at least a dozen Tawny Pipits, Northern Wheatear, Whinchat and many Stonechats and Corn Buntings.

We counted 33 Northern Ravens, 4 Short-toed Eagles, a Booted Eagle and a Montagu’s Harrier in the surrounding fields. A pair of Little Owls showed well as did Crested Lark, Goldfinch, Spanish Sparrow and Spotless Starling. 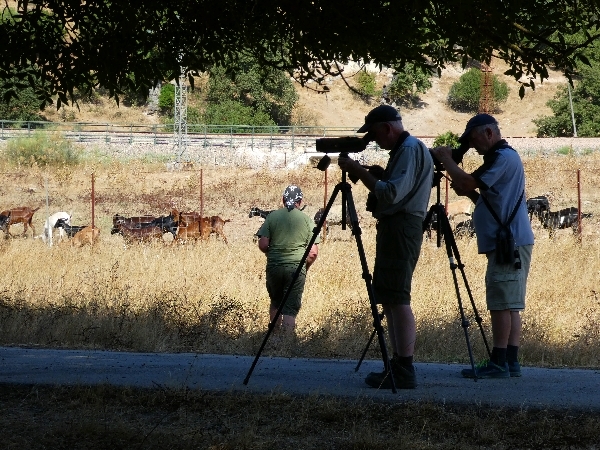 We drove up to Gaucin, where my summer home is situated, one of the group saw and heard a fly-over Crossbill whilst the rest of us sat in a venta drinking coffee. Dawn, my wife joined us for the day at this point.

From Guacin we drove down to the Guadiaro River at Cortes and walked to our favourite picnic spot, the area was full of birds as usual. Both Grey & White Wagtails were soon on the list, a Firecrest showed very well and we also found Common Kingfisher, Blackcap, Eurasian Chiffchaff, Spotted Flycatcher, Common Redstart and a couple of Grey Herons. 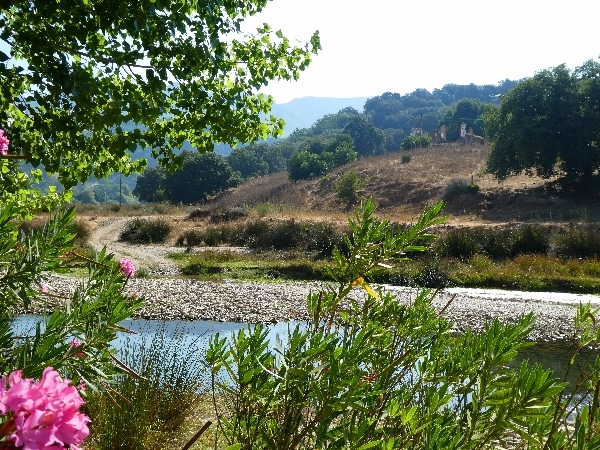 At the river - taken by Dawn

After stopping in Cortes for lunch we drove further up the Libar Valley to Montejaque where we turned into the Llanos de Libar, a very picturesque, hidden valley behind the village. We spent two hours trolling along about 10km of the track passing through open rocky terrain, into a fertile wide-bottomed valley and then into an oak woodland. We had several target species, most of which were found. 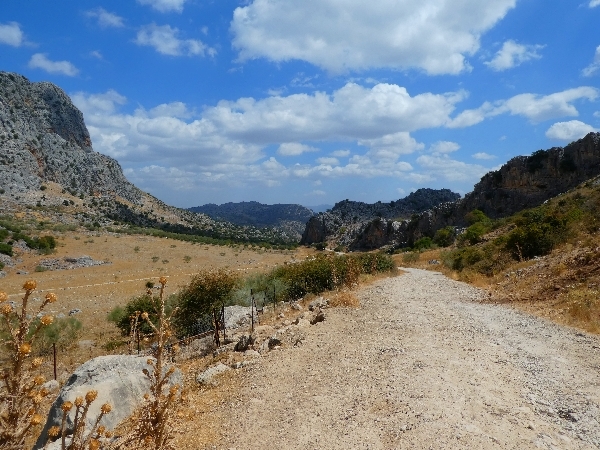 Black Wheatear, Black Redstart, Blue Rock Thrush, Cirl Bunting and Crag Martin we found pretty quickly but others were slow to show. After driving out of the rocky valley into the ‘farmland’ we added Black-eared and Northern Wheatears, Rock Sparrow and plenty of Stonechats. 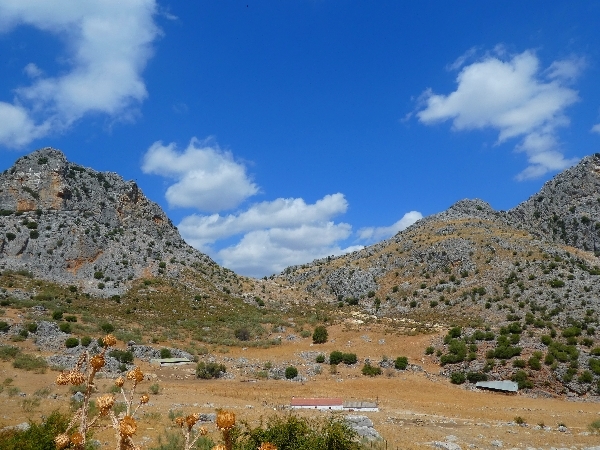 In the oak woodland we spent a lot of time searching for Orphean Warbler but at first we logged Subalpine Warbler, Mistle Thrush, dozens of Chaffinches and finally a female Orphean Warbler appeared but unfortunately only two of us saw it.

We slowly retraced our steps out of the valley, stopping to search for Rock Bunting and Red-billed Chough, both of which remained elusive. Griffon Vultures provided some entertainment until we left at 4pm’ 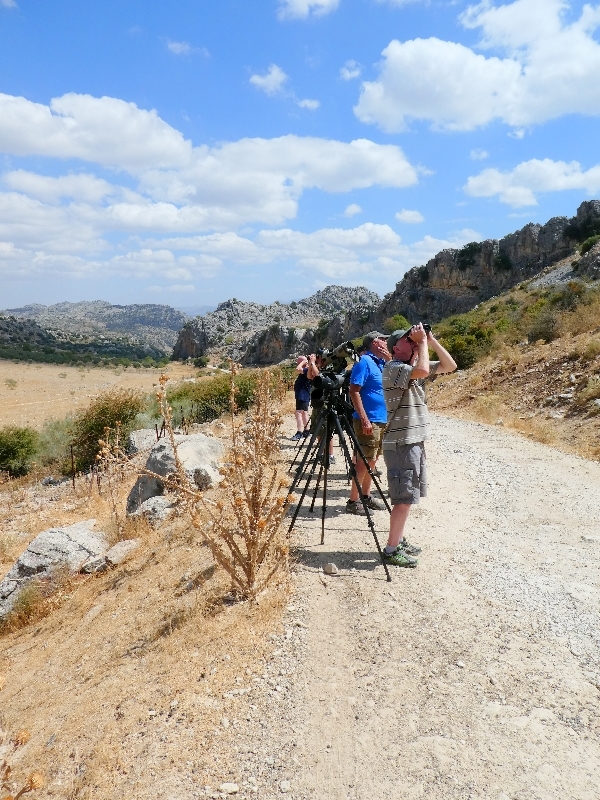 Birding the Llanos - taken by Dawn

An ice-cream stop in Montejaque, a stop in Gaucin to drop off Dawn and a stop at the Sierra de Crestellina view-point resulted in our homeward journey lasting 2 hours. We passed Tarifa and the raptor watch-points which looked very quiet at that time but obviously were very busy this morning.

We had both Monarch and Scarce Swallowtail Butterflies in the hotel garden as we went to our bungalow-style rooms. 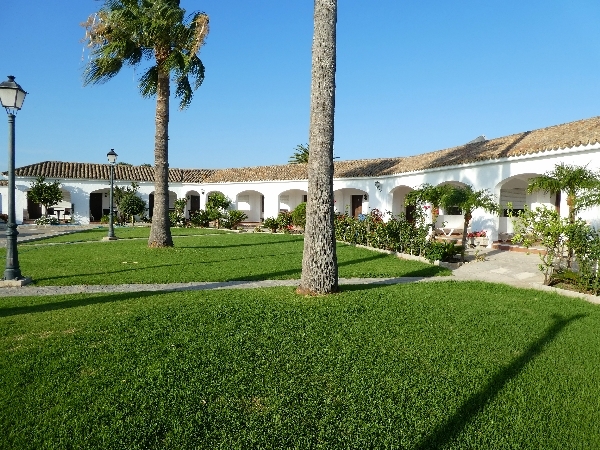 our rooms at the hotel

A little later I noticed both Spotted Flycatcher and a Eurasian Hoopoe from my bathroom window, two nice species to complete our last full day. 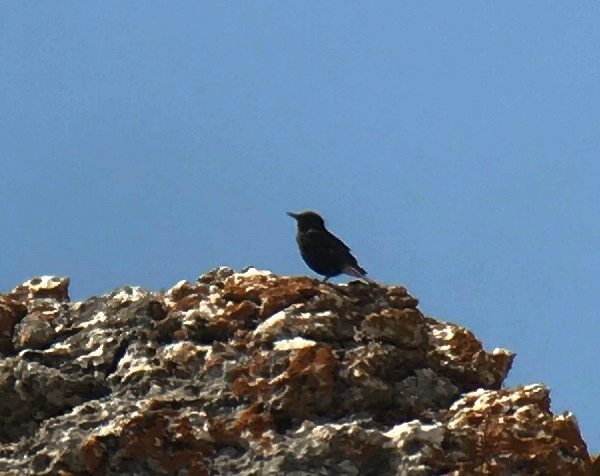 Our total now stands at 168, a fantastic total for 7 days birding in Andalucia.