WEATHER: cloudy for most of the day, but clear later, top temp 25C light winds

We had a great start to the day, at Los Lances beach many birds were milling about and we added several new species to our list. But, before went to the beach we had a quick walk into the pine woods near the hotel, they lead down to the beach a couple of kilometers from Los Lances. No birds were seen in the woods, but we found Sandwich Terns and a single Whimbrel along the beach. 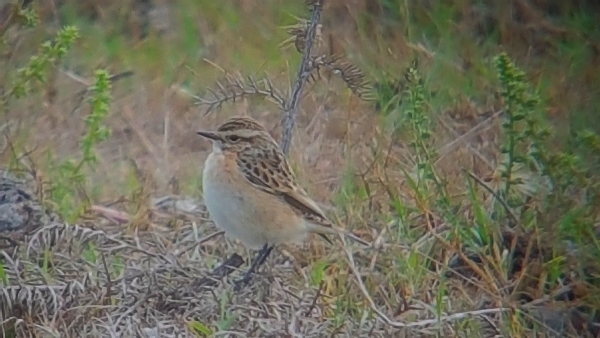 whinchat seen in the paddocks at Los Lances Beach

We parked the bus at the start of the walk to the Los Lances beach and scanned the large paddocks for larks. We were in luck as a large flock of Calandra Larks fed in the grass along with a dozen or so of Skylarks and lots of Corn Buntings. We also saw a Hare out in the fields as well as Common Stonechats, Common Kestrel and a Peregrine Falcon flew over. 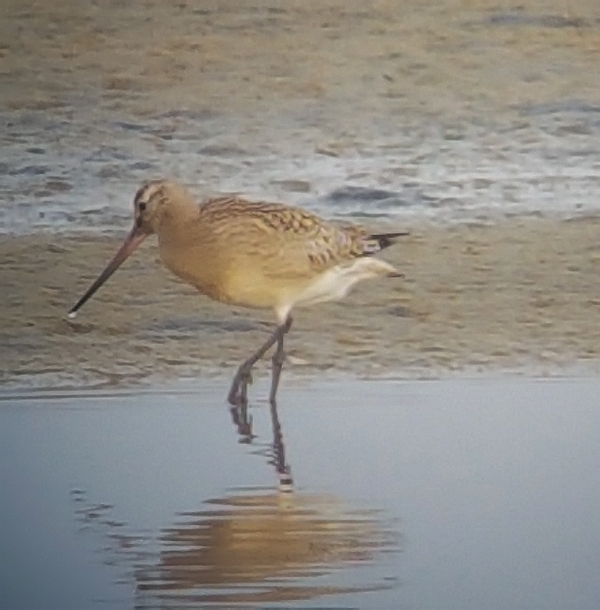 The beach area wasn’t too bad either, a Bar-tailed Godwit fed close to the hide and Sanderling, Dunlin, Curlew Sandpiper, Common Sandpiper, Kentish and Greater Ringed Plovers were spread out along the beach pools. Sandwich Terns sat on posts as did a Common Kingfisher and a Grey Heron, we also found several Audouin’s Gulls, a dozen or so Cory’s Shearwaters and the usual huge mixed flock of Lesser Black-backed and Yellow-legged Gulls. 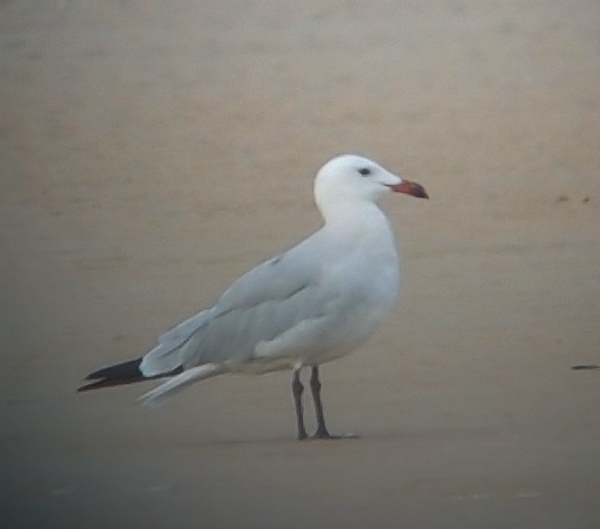 One or two raptors went over in the gloomy cloud, a single Honey Buzzard, Booted Eagles and Black Kites. We left the beach around 11am and after some confusion with the boat times we eventually boarded the 12:30 Dolphin and Whale Watching Cruise.

The sea was very calm and soon we were finding birds, a raft of some 20-25 Cory Shearwaters was nice to see, two Northern Gannets flew over the boat and then it went relatively quiet for quite a while. We did have the distraction of lots of pods of Dolphins to contend with, we watched mixed-pods of Striped and Common Dolphins and a few Sun-fish occasionally jumped from the water. 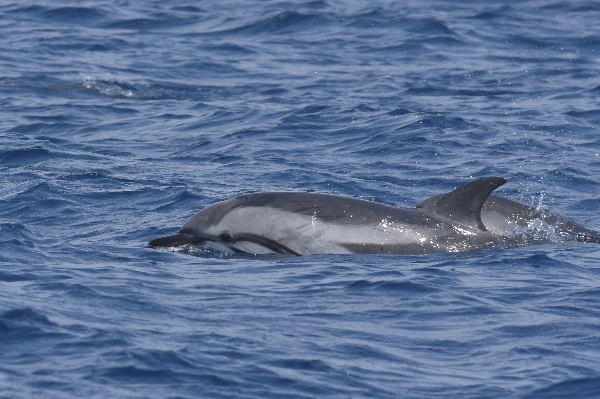 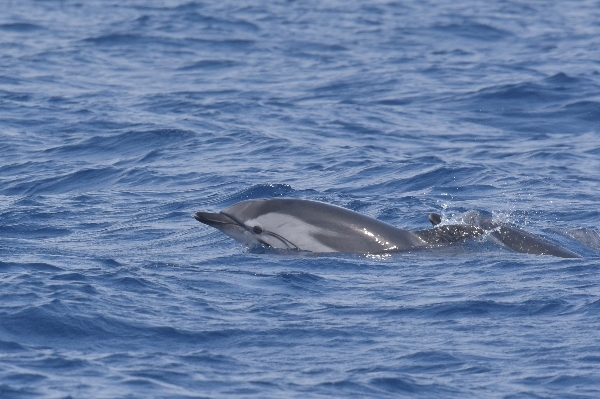 The best bird sighting by far was the STORM PETREL, we had at least 4 sightings, one or two were quite close to the side of the boat. We then spent 30 minutes or so searching for Pilot Whales but failed to find a single one.

We were back on dry land by 2:30pm and we went straight to a coffee house, I would have been lynched if I did not comply!

At the car park we noticed quite a few Booted Eagles drifting over the town and so we decided to visit El Trafico Raptor Watch Point, what a great decision it turned out to be. For the next couple of hours we had an incredible experience watching a couple of thousand raptors form many ‘kettles’ on the thermals before drifting off. 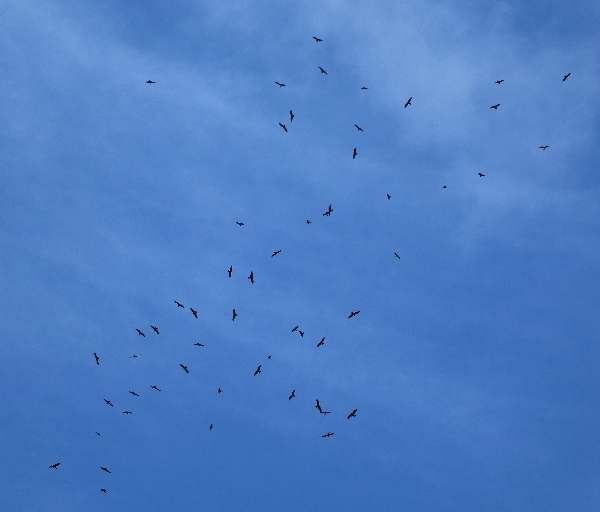 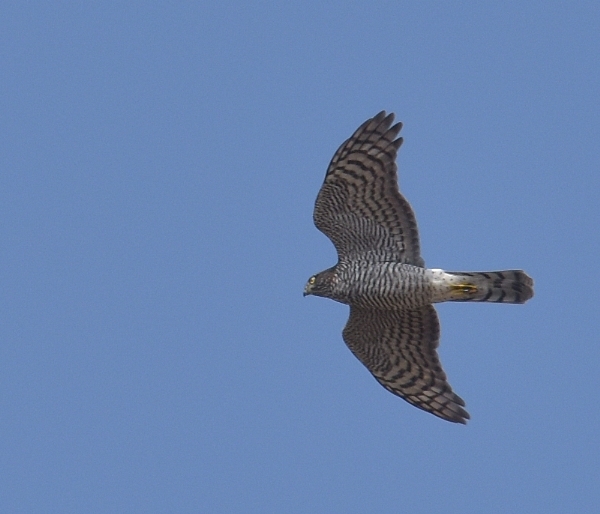 A Sparrowhawk - taken by Richard Pettett

At one stage a flock of 200-300 White Storks circled over us and a flock of 30+ Bee-eaters were seen very high up. We moved to a nearby valley so Richard could photograph low-flying Kites, from there we saw the Bee-eaters and another Peregrine Falcon. 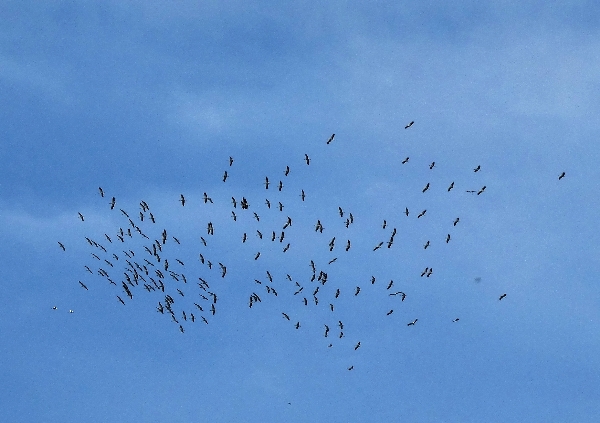 some of the White Storks

By 4:30pm we were getting tired but the birds just kept coming over, we left at that point and drove down to the Ojen valley. Our short time there produced very few birds, we added European Robin to the ‘seen’ list and we also found two interesting butterflies. The first was a ZELLER’S SKIPPER  (Borbo borbonica),  a little beast that I have been wanting to see forever. The other was a Monarch, it was feeding on Tropical Milkweed as usual. 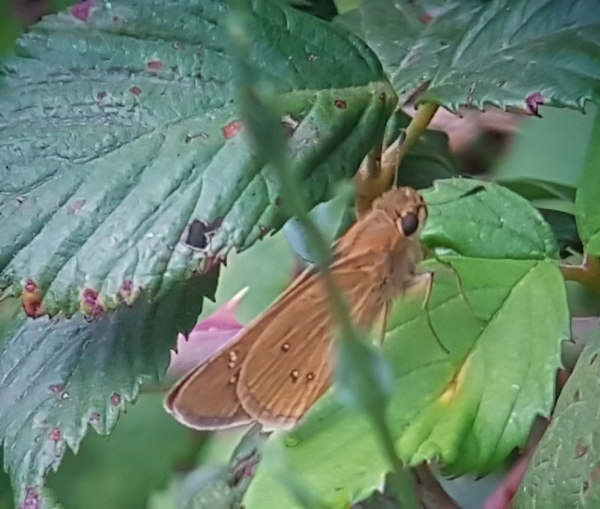 We were back at the hotel at 6pm, our earliest yet, tomorrow 3 more people are joining the tour for the last two days.