We left the hotel at the usual time of 8am and drove west for an hour, the Bird reserve at Farasuto consists of woodland and sits on the banks of the river. There are several tracks through the woodland and also areas of farmland, that is where we started our first walk. 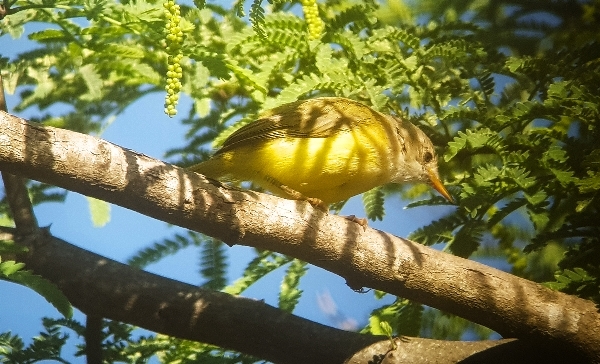 A typical Gambian morning’s birding ensued, with birds flitting about everywhere, we listed about 20 species within the first half-an-hour. We had great views of Grey-backed Eremomela, Yellow-fronted Tinkerbird, Levaillant’s Cuckoo, Splendid Sunbird, Black-winged Bishop and many common species. 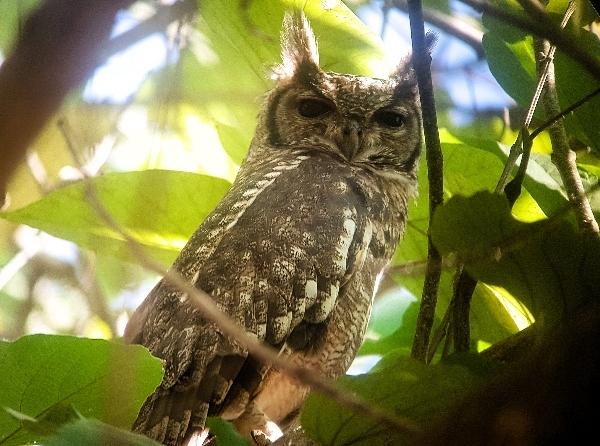 A local guide, Mustafa, then led us into the forest to look for owls and nightjars, we didn’t actually search for any of them as Mustafa knew exactly where they were roosting. First he showed us a pair of Greyish Eagle Owls, we had excellent views of them. Then we walked a little further in the woods and he pointed out two roosting Standard-winged Nightjars. Wow, that was fantastic. 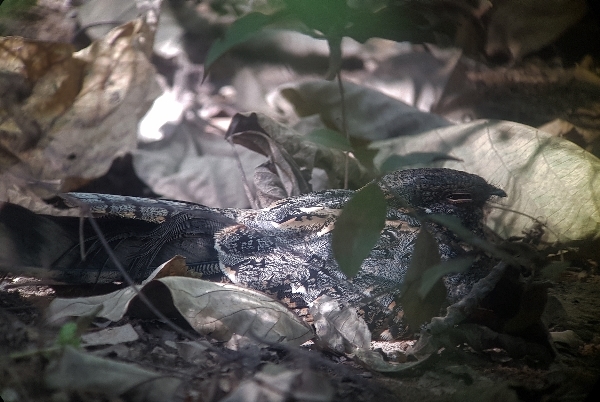 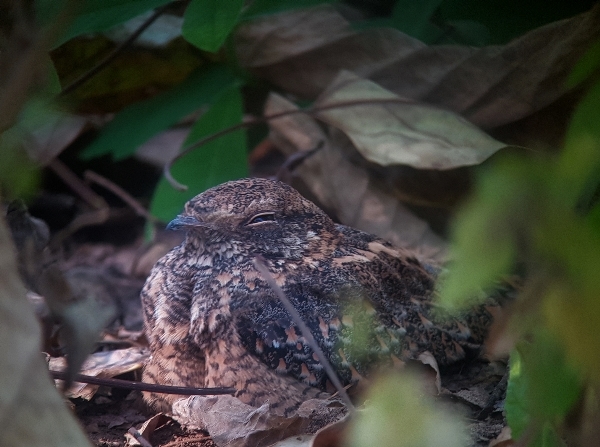 Next we sat on benches and watched a watering station where trays of water are ‘planted’ in the trees at eye level and dozens of birds were coming down to drink. Nothing spectacular happened except for the appearance of an African Goshawk, this rarely seen predator was the second sighting we had had of this species. 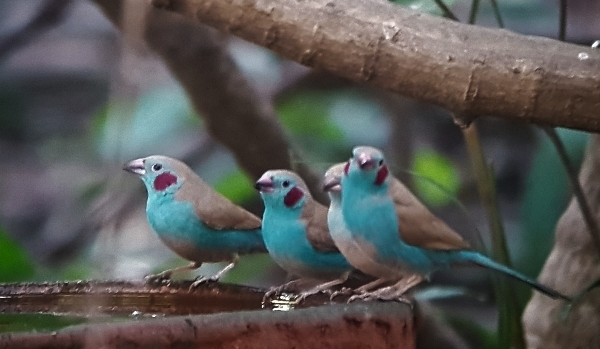 After watching lots of common species such as Red-billed Firefinch, Red-cheeked Cordonbleu, Village and Little Weavers, we took another walk into a different section of the reserve. This time there were lots of birds to look at: we finally got great views of Grey-headed Bristlebird and Oriole Warbler. A Common Wattle-eye sat out nicely as did a Red-bellied Paradise Flycatcher. We also saw Common Gonolek, Yellow-breasted Apalis, and African Thrush. 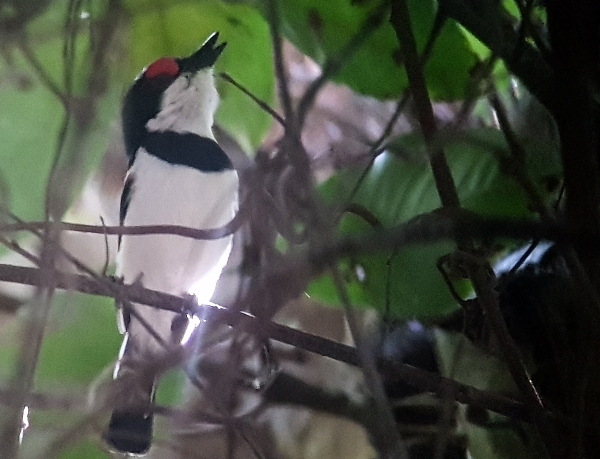 Common Wattle-eye, you can just see the red wattle above the eye

Mustafa led us to our second owl of the day where he showed us African Wood Owl, about the size of a Tawny Owl this bird was tucked away in the foliage and was harder to see than the Greyish Eagle Owl.

As we walked along the shore of the river we scanned pools and the edges of the mangrove swamp, finding: Senegal Thick-knee, Yellow-wattled Lapwing, Whimbrel, Common Sandpiper, Western Reef Egret, Pied Kingfisher and Blue-bellied Roller. A few birds flew over us including a Shrikra, Yellow-billed Stork and Long-tailed Cormorant. 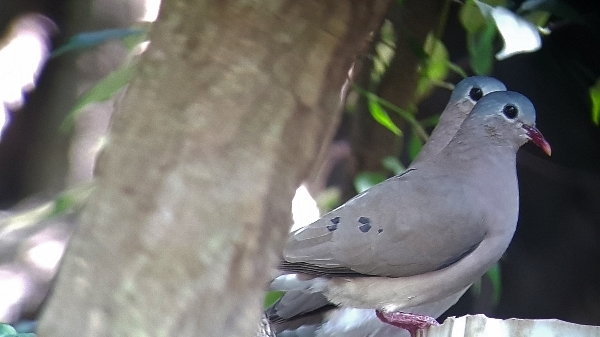 We then sat at a second ‘feeding’ station which had much more activity, lots of species we coming down to drink we had great views of: Splendid Sunbird, Black-rumped and Orange-cheeked Waxbills, there were also lots of weavers and bishops, another Red-bellied Paradise Flycatcher, Blue-spotted Wood Doves and Yellow-fronted Canary. 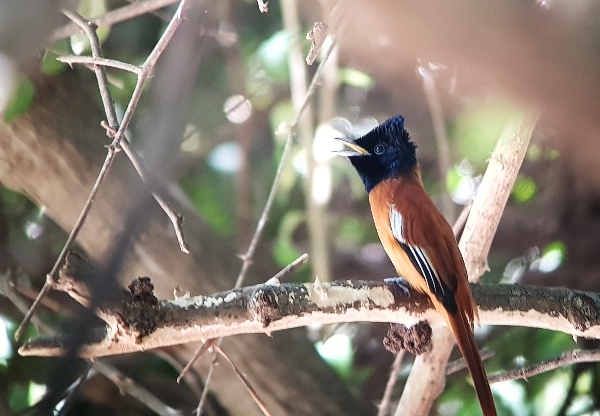 Lunch was a unique experience, we caught a ferry and were taken to a private island where a restaurant and lodgings were found. We sat in a huge open plan dining room and sat drinking cold drinks as we waited for our food. It took quite a while for the food to arrive, in fact it was about 1 ½ hours so most of us went birding in the grounds.

The Purple Glossy Starling has an unbelievable shiny plumage, the photo below have not be enhanced in any way. We also saw Bearded Barbet, Grey-headed Sparrow, Red-billed and African Hornbills and a few more species. 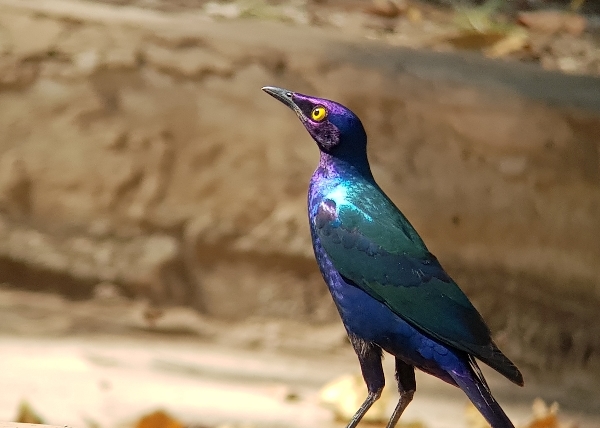 Lunch arrived at 3pm and by 4pm we were back on the ferry which broke down, so we had to be rowed across the small expanse of water to the landing jetty. 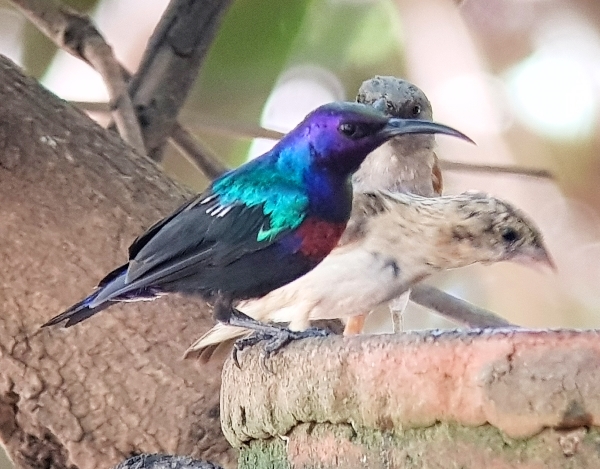 From Farasuto we drove the short distance to Pirang Shrimp Farm. Which is disused, but the huge pools are still there and hundreds of birds feed or roost in them. We had a fantastic hour walking around the pools, we listed about 50 species, seventeen of them were waders!! 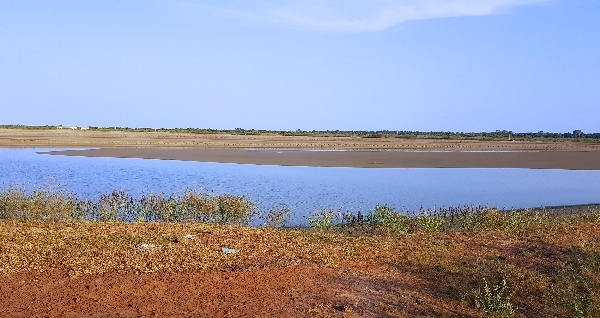 one of the pools at the disused Shrimp Farm

Most of group had much better views of Bar-tailed Godwit, Ruff, Redshank and Greenshank, Common Ringed Plover, Ruddy Turnstone, Gull-billed Tern and Grey Plover, It was a fabulous last hour of the day, the light was exquisite with a nice temperature, the light began to fade as we made our way back to the bus. 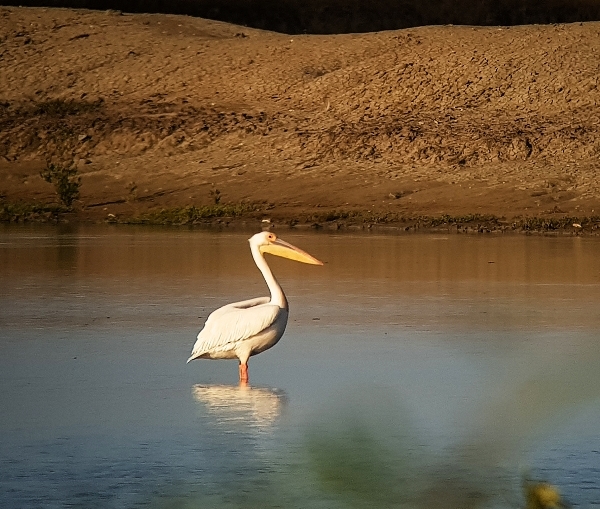 our first and only Great White Pelican of the trip

We arrived back at the hotel much later than usual, we took dinner at 8pm and called the checklist after that, we had added 11 new species to the trip list, we have one more full day left.