We were all packed and ready to begin our journey upriver to Tendaba Camp at 8am. It was very quiet on the roads because it was a Sunday so we made good progress, arriving at Pirang within the hour. The walk through the forest along well-trodden tracks was a little quiet at first but it soon picked up.

the group in Pirang Forest eating Spunge Fruit - I don't why?

Our first target bird was the Verreaux's Eagle Owl but we got distracted by a bunch of Brown- necked Parrots. They were feeding in the canopy and we scoped them easily. The owl was a little more difficult, it took quite a while and when we actually found it the sighting wasn’t great even through the scope. 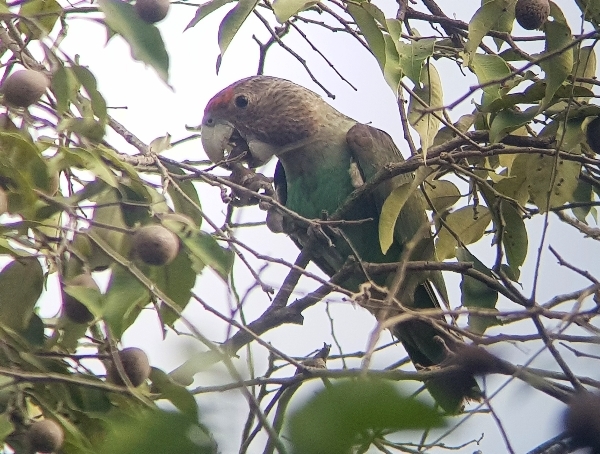 For next two hours we had a fantastic bird-filled session, it was superb. A string of excellent species offered themselves up to our optics, some of those species are hard to find in the Gambia. We found a Yellowbill,  what a great  bird that one is. Then we found a Green Hylia followed by Green Crombec. 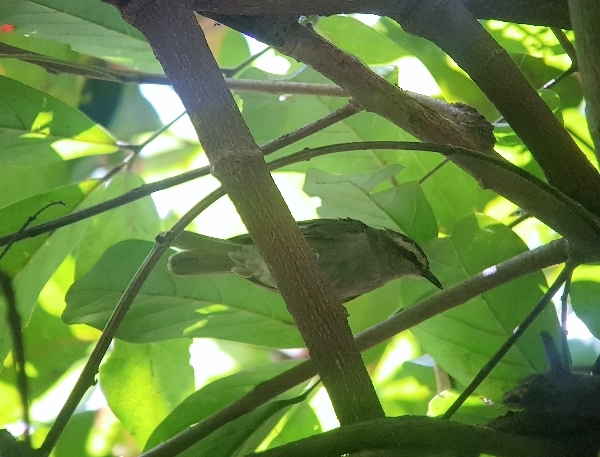 Our guides then led us to a spot where a real goodie could be seen the WHITE-SPOTTED FLUFFTAIL, no I’m making up the names as I go along, it is real. After about a twenty minute wait the bird finally appeared, it showed briefly but very well and everyone got to see it except Sue who was fiddling with her camera!!

We continued ur walk finding some super birds, Yellow-breasted Apalis, both the Collared and later the Green-headed Hummingbirds were seen and Violet Turaco also put an appearance. Many other species entertained us before we got back to the bus.

A stake-out at the White-tailed Flufftail site

It was 1pm when we said goodbye to Cowsu the local guide as we left the Pirang Forest. We drove for over an hour before we stopped to each a picnic lunch. We had already made one or two unscheduled stops to look at our first Abyssinian Roller, also Lizard Buzzard and several other species.

We stopped by the roadside near some rice fields and a few small pools, it was difficult to eat our sandwiches because birds kept appearing, African Harrier Hawk, Wahlberg’s Eagle, Dark Chanting Goshawk, Grasshopper Buzzard, White-backed Vulture and Pink-backed pelicans were all seen up on the thermals with Hooded Vultures and Black Kites.

After lunch we continued along the excellent main road, I remember not so long ago that this was a treacherous bunpy dirt track which took hours to negotiate, but now you can fly along to Tendaba in no time.

We made more roadside stops to look at perched birds, they were mainly raptors but we alao saw, Black-winged Bishop, more Abyssinian Roller and Bruce’s Green Pigeon. The raptors were fantastic, we saw a very close Tawny Eagle and in the next tree was a Long-crested Eagle, we also saw Grey Kestrel and another Lizard Buzzard.

Our last stop was at Tendaba Airfield, it is no longer an airfield, it is a wide open swamp and an excellent birding place. We saw twenty odd species there including our first African hobby and Marsh Harrier, we also saw two Long-crested Eagles, Gabar Goshawk, Abyssinian Roller, Broad-billed Roller and Bruce’s Green Pigeon.

We arrived at Tendaba Camp around 6pm, the usual room allocation chaos ensued, the place hasn’t changed, it is still very run-down and in need of demolition! Surprisingly, the food was rather good which was served at 8pm, we all retired to bed around 9:30pm.