WASSU QUARRY AND SURROUNDS – BOAT TRIP ALONG THE RIVER

A shoirt walk along the lane outside our ‘Camp’ produced sightings of a few species , nothing new to add to the list but we enjoyed Grey Kestrel, Shikra, Little Weaver, Bronze-tailed and Greater-eared Glossy Starlings, Beautiful Sunbird and Bruce’s Green Pigeon.

After a nice breakfast we boarded the bus for the ferry crossing to the north bank of the river, at the ferry there was a long wait we saw our first Swamp Flycatcher from the quay. To avoid waiting a fair while for the car ferry, we jumped on board a ferry-taxi and left the bus in the queue, we birded as we walked along a dirt on the north bank. 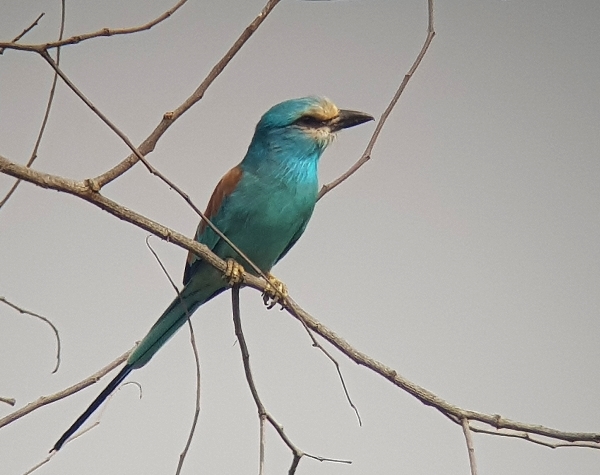 Bearded Barbets were seen a couple of times, Bruce’s Green Pigeons flew over, a Shrikra dashed about trying to catch the weavers and a pale morph Gabar Goshawk flew over.

birding the track near the ferry

The bus finally arrived and we jumped back on it to drive to Wassu some 20km away, Abyssinian Rollers sat on power lines and poles, dark chanting Goshawks perched in the trees and weavers dashed everywhere in large groups.

We parked a few hundred meters from the quarry and walked along a quiet track searching for CARMINE BEE-EATERS, our most wanted species and the main reason we had returned to the quarry area. A Levaillant’s Cuckoo sat out nicely for us as did several Abyssinian Rollers, we also saw a few raptors circling above us. 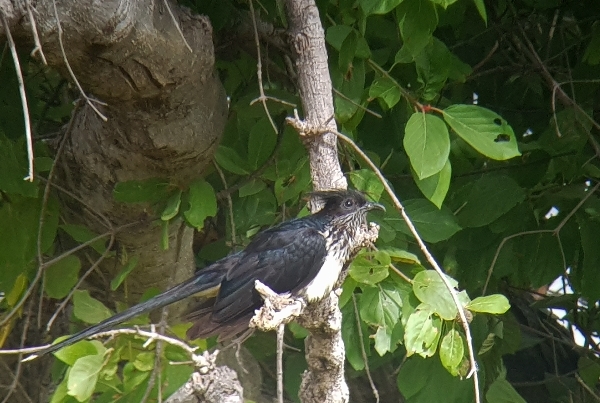 A better picture of Levaillant's Cuckoo

The huge MARTIAL EAGLE was spotted by Modou, it circled slowly for all of to see in the scope. Then an African Hawk Eagle and a Wahlberg Eagle were also seen well. White-backed Vultures followed the eagles into the notebook as dida light morph Gabar Goshawk, Shikra and Western Marsh Harrier.

The quarry was heaving with birds as usual, a cloud of hirundines dashed all around swooping down to drink with Palm and Little Swifts. We saw Mosque and Red-chested Swallows, House and Sand Martins. The huge colony of Red-throated Bee-eaters were ever-present giving us superb views as they perched near their nest holes or in nearby trees. 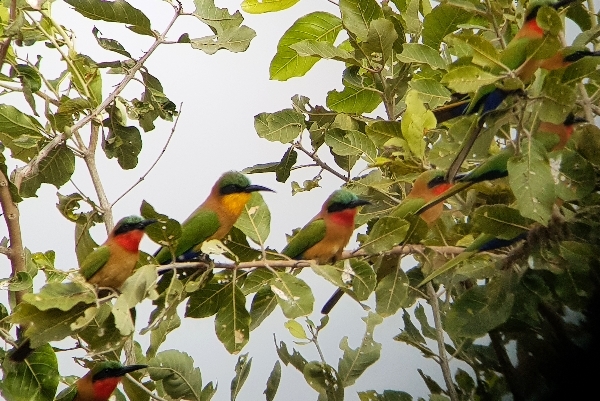 We also added Black-rumped Waxbill, White-billed Buffalo Weaver, Green Woodhoopoe, Yellow-billed Kite and a few lapwings and waders near the water, but the Greater Painted Snipe was not there.

We drove to another track not far away and Modou quickly found us a few CARMINE BEE-EATER,  what a bird, incredible colours. We also found Cutthroat Finch, Grey-headed Sparrow and large party of hirundines landed in a nearby tree. A quick produced a sighting of a single PLAIN MARTIN, this was an unbelievable find and a lifer for Modou. Unfortunately a Roller flew into the tree and flushed the lot of them, the Martin did not return so we had no photographic evidence of this rare sighting!! 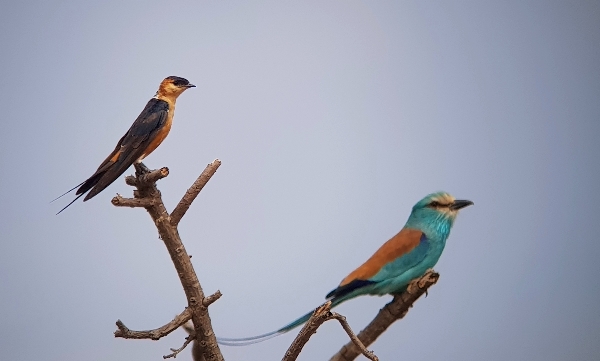 the huge Mopsque Swallow is almost the same size as the Roller! 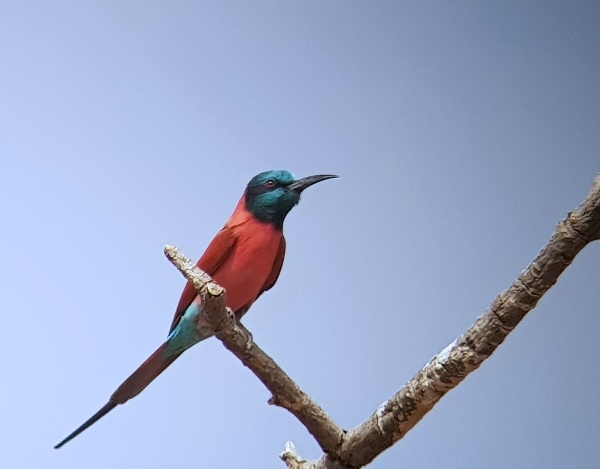 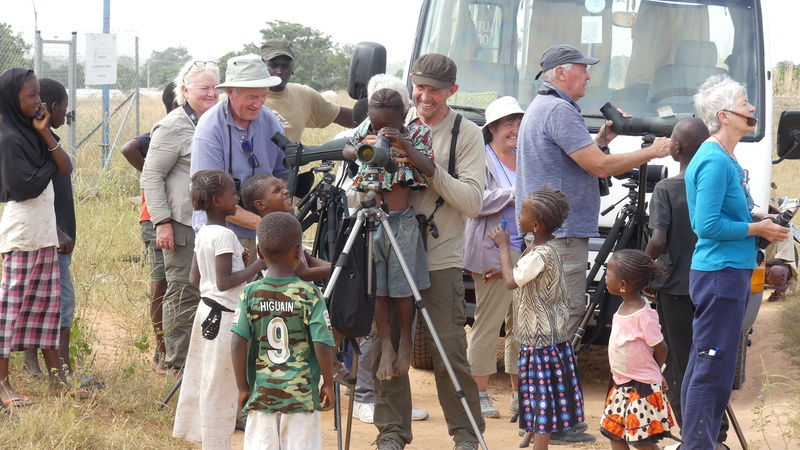 The local Kids having fun looking through our scopes

We drove back to the river only to find an even longer queue so we caught a river taxi back to our ‘Camp’ which had a jetty in the back garden. Lunch was made up sandwiches with a cold drink followed by a nap in the heat of the day.

Our boat trip along the river commenced at 3:30pm we were all refreshed and raring to go, we had several target species so we set out to find them. The first new bird for the list was the Yellow-backed Weaver (formerly Black-headed Weaver), we saw several colonies of them along the north bank. We then saw our 8th Kingfisher of the trip when a Grey-headed Kingfisher was found sitting out waiting for our attention. 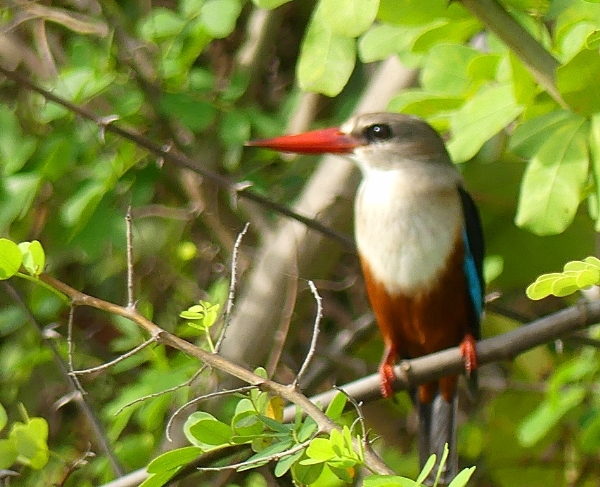 A couple of Palm-nut Vultures were nice to see as was Woodland Kingfisher, Malachite Kingfisher, African Darter, Long-tailed Cormorant and Swamp Flycatcher. A Little Grebe looked very out of place in the centre of this mighty river but it looked healthy.

As we were watching the Grebe, Modou called a SHINING BLUE KINGFISHER, this bird dashed across the river and was lost to sight in the mangroves, only a few of the group picked it out in their binoculars.

We turned up a smaller creek and intensified our search for the FINFOOT, which is a grebe-like water bird that winters in the area. Soon we found one, a young bird, but an African Finfoot all the same, it was a great sighting and an excellent species for our list. 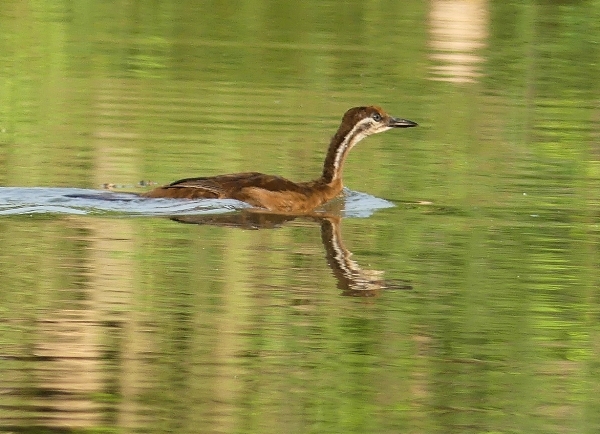 After the creek excitement we quickly ran into another adventure, this time it was a mammal that got us all on the edge of our seats. A Hippopotamus appeared some distance away so we set off to investigate. We kept a good distance away from this huge and dangerous animal, it surfaced several times before we left it in peace. 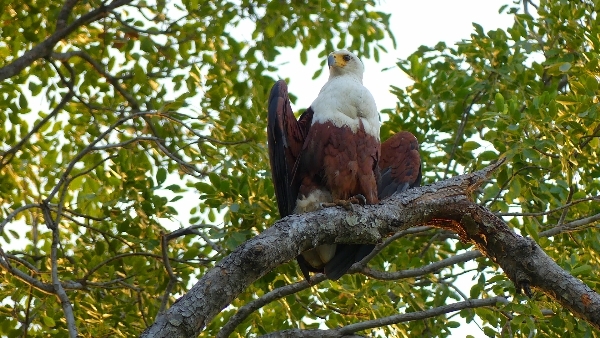 another of Sue's pictures taken from the boat - African Fish Eagle

We then crossed the river and began our journey back along the south side, we found Green Vervet Monkeys, more Palm-nut Vultures and eventually our target eagle, the African Fish Eagle. Boy did this bird pose for the cameras, it sat just above us and opened it wings and just sat there, amazing. 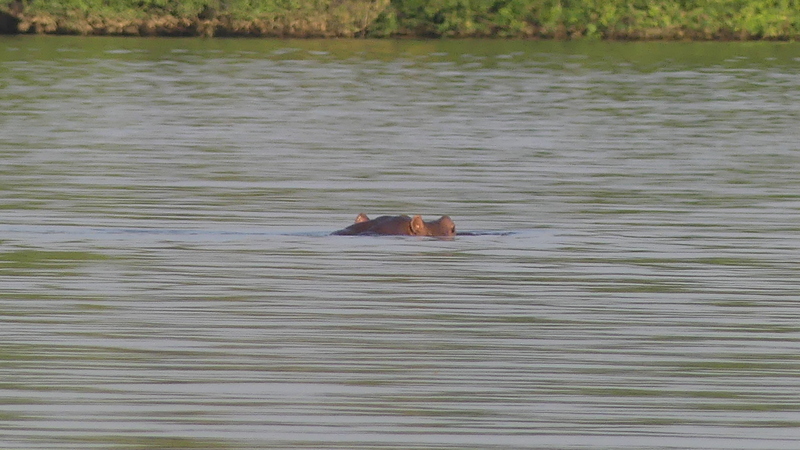 a record shot of the Hippo by Sue Hayes

Next we had another encounter with a Shining Blue Kingfisher, This time most of us saw it as it flew from a nearby perch, it didn’t fly far but was lost to sight. We cut the engine and waited a short while, then the bird reappeared and flew down river and landed a long way off. One person missed it so we followed but could not relocate it.

Other sightings included a tree full of Baboons, a huge flock of Yellow-billed Kites, a pair of Harrier Hawks and a large Owl flew across the river ahead of us. We approached the place where the owl disappeared and Modou found a Verraux’s Owl perched in a tree.

We also saw lots of Straited Herons, a single Black-crowned Night Heron, Grey Heron, Great, Intermediate and Cattle Egrets and many common species. Everyone loved the trip it was really enjoyable and with all our target species in the bag we couldn’t have asked for more. We got back to our private jetty just as it was getting dark.