THE QUEST FOR 5 SPECIES OF GREBES IN WEYMOUTH

All five species of grebe that are found in the UK during the winter months were present in the Weymouth area over the last couple of days so Guy and I set out this morning to look for them all. We left my house at 8am, it was very cold but we had a clear sky with a chilly light northerly wind.

Our first stop was at Green Hill on the east side of Weymouth Bay, we parked on the hill, I got out first, I opened the boot and for a laugh I hid Guy’s scope by my side of the car. Oh Boy, he went into panic mode, he thought he had left it in his car back at my house! Just before he went into melt down, I produced his scope, I can’t repeat the expletives that flowed form his mouth, but I could see the relief in his face, Ha!

We walked down to the pebble beach where we had reasonable views of the Bay. The bright sunshine warmed us up but played havoc with our viewing as we were looking into the sun from where we stood. It was very quiet out there, the sea was very calm so anything that sat on the water was easily visible. We picked out our first Grebe of the day, Great Crested Grebe! There was about 16 out there, we also saw Cormorants and a few gulls. No sign of the Red-necked Grebe that was seen there yesterday, our first dip of the day!

Next we drove to the west side of Weymouth, Guy picked out a Peregrine as we drove along the seafront in Weymouth. We parked in Bincleaves Road near the Nothe Forte, from our high position we had great views of the eastern side of Portland Harbour and Newton Cove. Once again, we picked out many Great Crested Grebes and Cormorants, also Mediterranean Gulls and not much else. After 10 minutes we found at least 20 more Great-crested Grebes, some very distant Red-breasted Mergansers (30+), a possible Black-throated Diver and a group of four Black-necked Grebes. 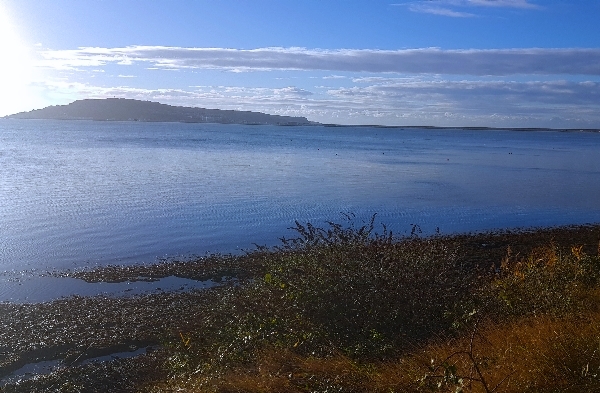 a view of Portland Harbour from the northern shore

We drove round to the causeway connects Weymouth to Portland and parked near Ferrybridge, we hoped that we would be much nearer to the Black-necked Grebes and to the diver species. It wasn’t much better from this western shore of the harbour because the grebes sat out in the middle and refused to come closer. We picked out 8 Black-necked Grebes (all little dots in scope), also many more Red-breasted Mergansers and finally we found the Slavonian Grebe! This bird sat alone but was super-distant, we needed to get closer. 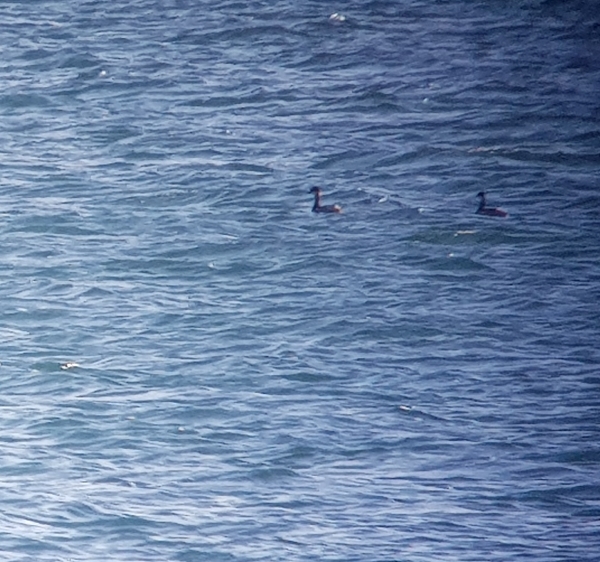 Before new moved on we walked across the main road to view Ferrybridge mudflats, there was over 300 Dark-bellied Brent Geese when we arrived in the car park but most of them had flown off, heading up the fleet. We picked out two Pale-bellied Brents in amongst the dark-bellied variety that had remained. Also on the mudflats were over 100 Dunlin, 50+ Greater Ringed Plovers, a couple of Oystercatchers and five Ruddy Turnstones. Many Black-headed Gulls and dozens of Mediterranean Gulls formed a feeding-flock over the water, they were following a group of 20+ Cormorants that were obviously chasing a shoal of fish. It was great bird watching to see so much action. 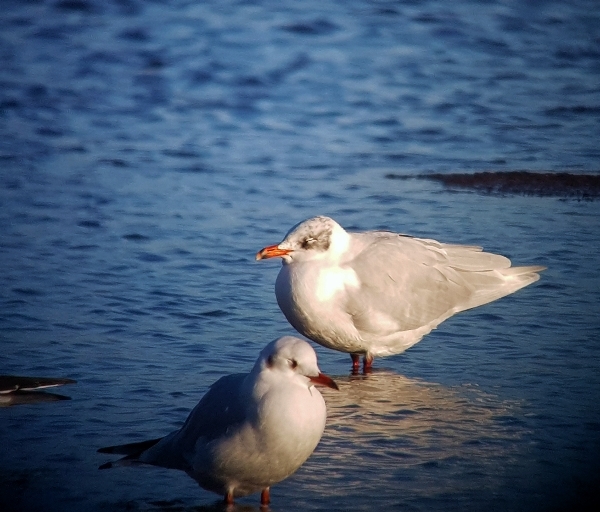 Black-headed (foreground) and Mediterranean Gull - both adults in winter plumage

A quick stop at the southern shore of Portland Harbour was made so I could buy lunch in the new and conveniently placed Lidl store whilst Guy scanned from the shore. We saw nothing new there, so, at this point in time (12 noon) we had 3 Grebe species in the bag with Little and Red-necked still on our wanted list. We decided to view the harbour from Weymouth Sailing Club on the northern shore, so we drove back into Weymouth and parked above the ramp at the club.

Guy picked out the Slavonian Grebe and we had better views of it, albeit still very distant, he also picked out a Great Northern Diver, much closer than the probable Black-throated Diver we saw earlier. We counted 9 Black-necked Grebes, seven in a group and two separated from them, but there was no sign of anything else out there. After nibbling our lunch whilst enjoying the warm sunshine we drove round to a site where a Pallas’s Warbler was assumed to be over-wintering. Two Mile Copse sits on the edge of Weymouth just north of Lodmoor Nature Reserve, we met a local birder, Pete Coe, he had seen a few Chiffchaffs but not the warbler. 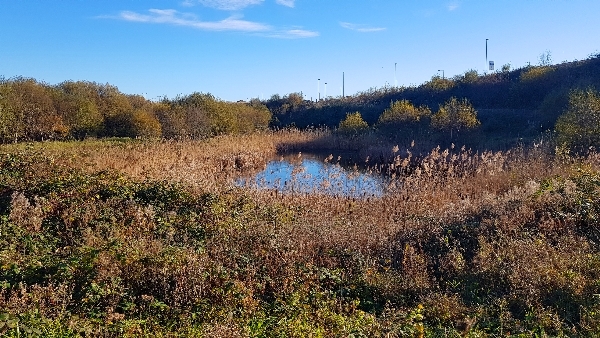 the scrub where we looked for the Pallas's Warbler

An hour was spent looking at everything that moved in the wood, we concentrated on the sheltered bushes that were bathed in sunshine. During our vigil we found half-a-dozen Common Chiffchaffs, Blue & Great Tits, Robin, Wren, Dunnock, Blackbird, Redwing, Raven (fly-by), Common Buzzard, Goldcrest and not much else. A Green Woodpecker was a nice find as we walked back up the hill to the car. 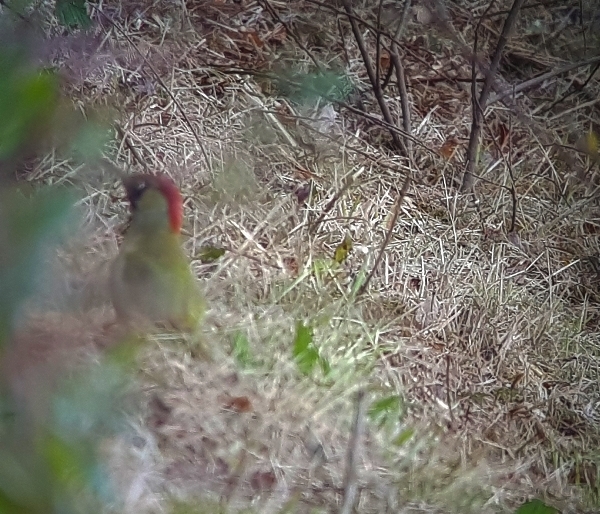 its a bit cheeky putting this one on the blog but I am struggling for pictures at this point!

Our quest for grebes continued as we arrived at Lodmoor RSPB Reserve, from the car we walked the entire length of the western track, we had glorious sunshine on our backs and the light was superb. We picked out all the usual suspects on Lodmoor but the stand out species were: the leucistic Ruff (this bird had disappeared for 6 weeks apparently visiting relatives in Hampshire) but was now settled again, hopefully for the winter. 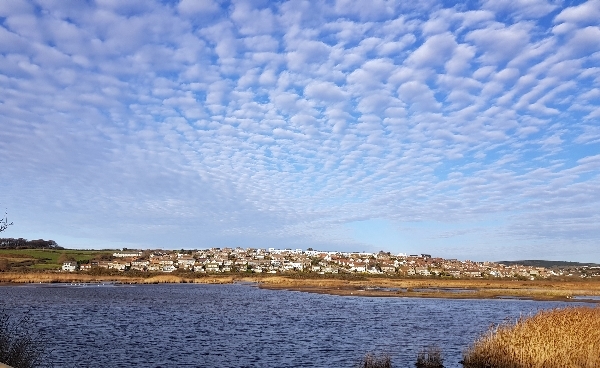 Also three Marsh Harriers were dancing gently over the reeds blissfully unaware of the panic and mayhem they were causing amongst the Lapwing and smaller waders. We watched Black-tailed Godwit, Dunlin, Common Snipe, Common Shelduck, Water Rail (heard), Cetti’s Warbler (heard), Common Kestrel and lots more gulls. We were hoping to see Little Grebe and perhaps the recently found, Iceland Gull, but we saw neither. 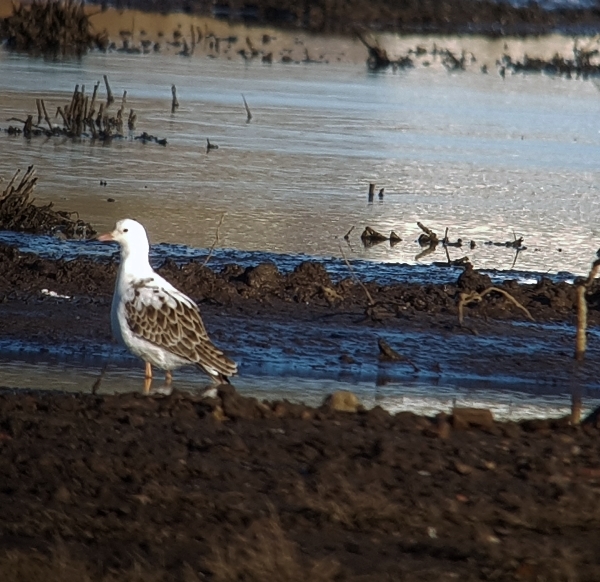 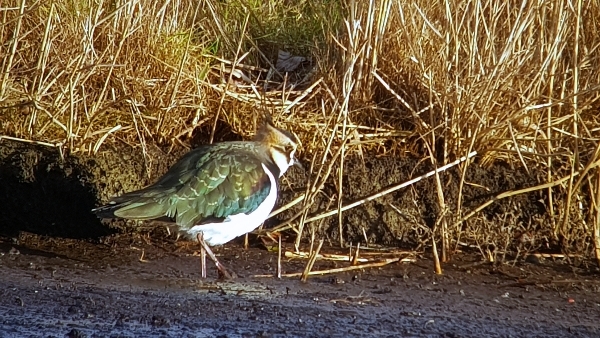 Despite the clear bright sky we starting losing light around 2:30pm so we set off to Radipole Lake to catch up with Little Grebe, we parked at the Tennis Courts along Radipole lake Lane and viewed the main lagoon from a fishing platform. 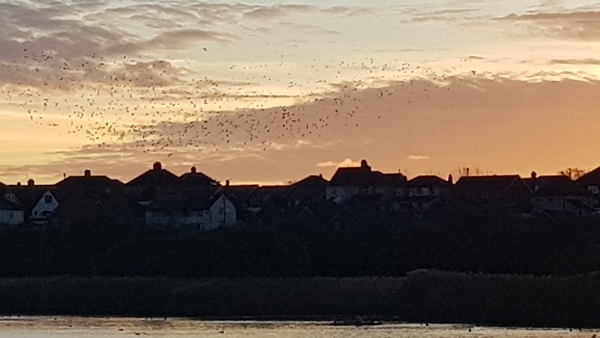 Unfortunately, we were looking directly into a setting sun, so most of the birds were just silhouettes. We added Tufted Duck and Common Pochard to the day list and then we had the most wonderful experience, when a party of Bearded Tits alighted in the reeds right next to us. It was fantastic, we saw several adult male birds with females and a couple of juveniles, what a privilege, neither of us had brought our scopes, I fumbled with my phone and binoculars trying to get a picture without much success, so I eventually walked over the car and got my scope so I could digi-scope them. 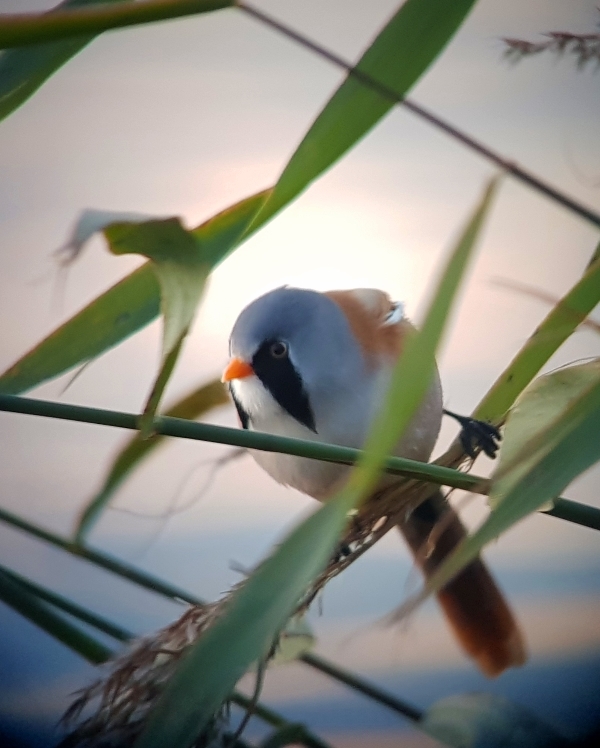 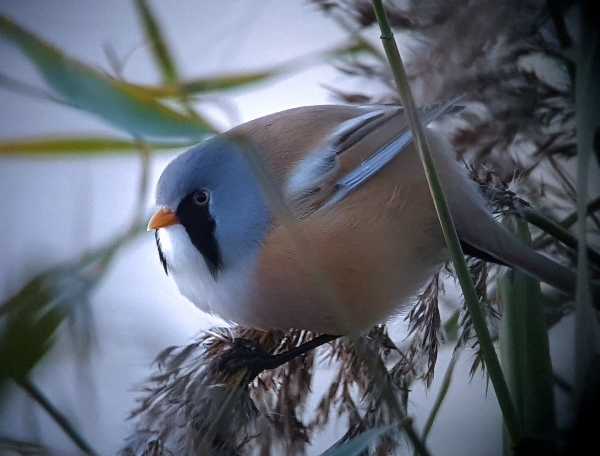 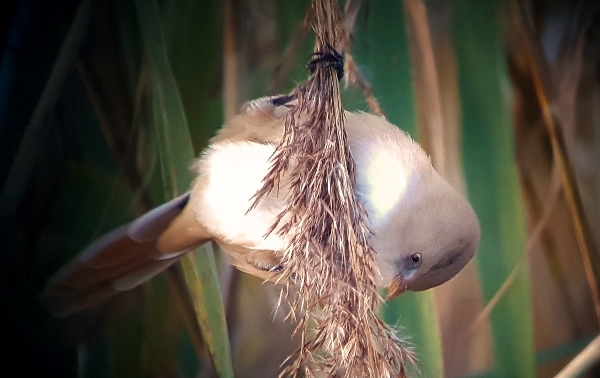 That was our best sighting of the day by a country mile, such an uplifting experience, we were both on a high after that. The icing on the cake was the most picturesque sunset I have seen in many years, it was stunning, the local Starling murmuration (about 2-5 thousand birds) added to the ambience. 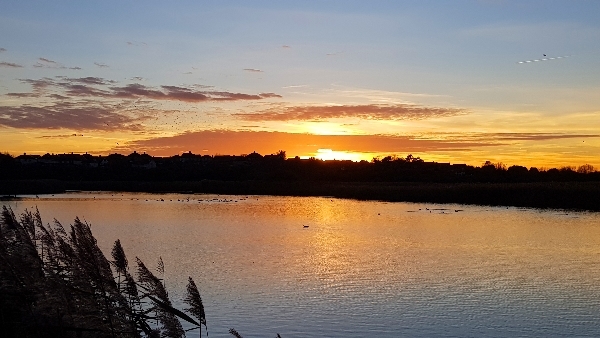 the sunset over Weymouth - there are about 2000 starlings in this picture, can you see them?

After that delightful experience and now in poor light we still needed our fourth Grebe species, so we drove to main car park at Radipole Lake, we searched the open water from bridge near the visitor’s centre as thousands of Starling whirled above us forming many balloon type shapes and sinusoidal contours. 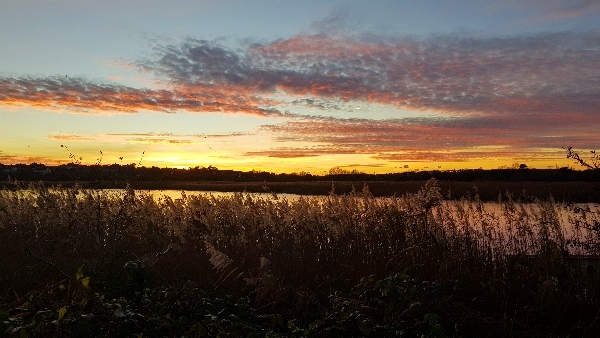 our last picture as we left Radipole Lake and Weymouth

Guy had a brainwave (make the most of it I thought, he doesn’t have many!) he suggested we viewed the boating lake under the bridge at the far end of the car park, we drove there to save time (it was all of 200 meters). Sure enough within seconds Guy picked out a Little Grebe, wowzzzah! That was our fourth species, I guess four out of five wasn’t bad.

The sunset continued to delight us all the way home as it changed the colour of the sky minute by minute, what a fantastic way to end the day!