The weather vastly improved for our last day of this New Year Birding Tour. It was much cooler but we left our superb guest house with a clear sky above us. Masses of Starlings were dashing over us, they had just 'errupted' from the main roost at Ham Wall, they were splitting up into smaller groups as they headed off to feed in all directions.

We spent all morning at Ham Wall searching the reedbeds and pools for a Bittern, unfortunately we never found a single one!  We saw the usual duck species, a few Grey Herons, several Marsh Harriers and a couple of Common Buzzards. Other species of note were Kingfisher, Great White Egret, Reed Bunting, Siskin, Bullfinch, Jay and Great Spotted Woodpecker. 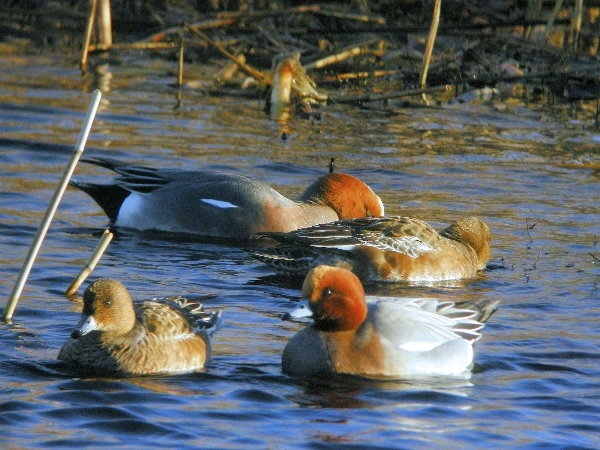 Wigeon taken from the Avalon Hide at Ham Wall

One lovely experience was on the return walk to the car park, the sunlight cast superb light on the marshes and dark clouds filled the sky behind them. Suddenly every bird present took to the sky, there were hundreds of Lapwings, Teal, Wigeon, Shoveler, Gadwall and Tufted Duck. They lit up as they twisted and turned in flight their light parts showing like a shower of pearls against the dark back-drop. The reason for all this commotion was a Peregrine Falcon, this bird tormented the flocks by circling above, finally it swooped down and just failed to catch a Teal. 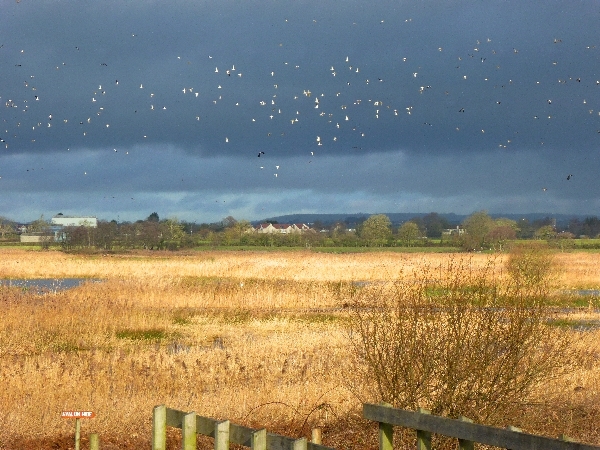 The ducks and lapwing over the marsh

After that excitement we loaded onto the bus and drove to RSPB Greylake where we had a very similar experience only on a much larger scale. Yes, from the car park at Greylake we enjoyed a fantastic show of large numbers of Lapwings, Golden Plover, Starlings and Thrushes. There must of been several thousand birds in the sky for about 30 minutes, clouds of Lapwings were out-shone by the beautiful Golden Plover which climbed to incredible heights before dropping back down to the fields. 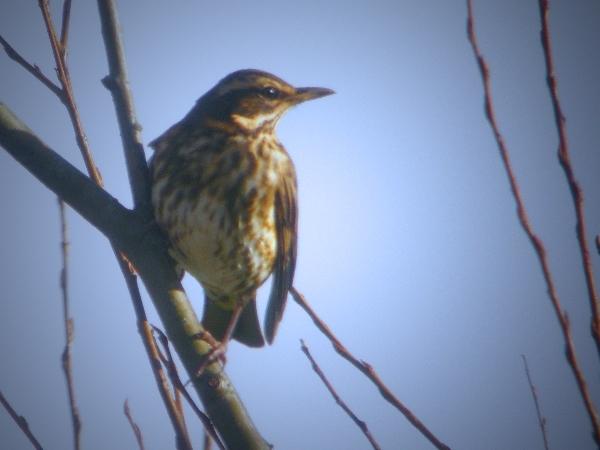 A Redwing in the car park at Greylake

From the hides we watched Harriers and Buzzards patrolling the marshes and causing panic in the duck flocks we also had great scope views of a pair of Water Rails.

The introduced Common Cranes can be viewed from a number of places near RSPB West Sedgemoor, however, most of the area, including Aller Moor, are very wet and unsuitable habitats for Cranes. A maize field near the village of Oathe was where we found them. We watched about 8 of them feeding near the maize, we also saw both Little & Great Egrets, Grey Wagtail, Stonechat and an obliging Common Buzzard. 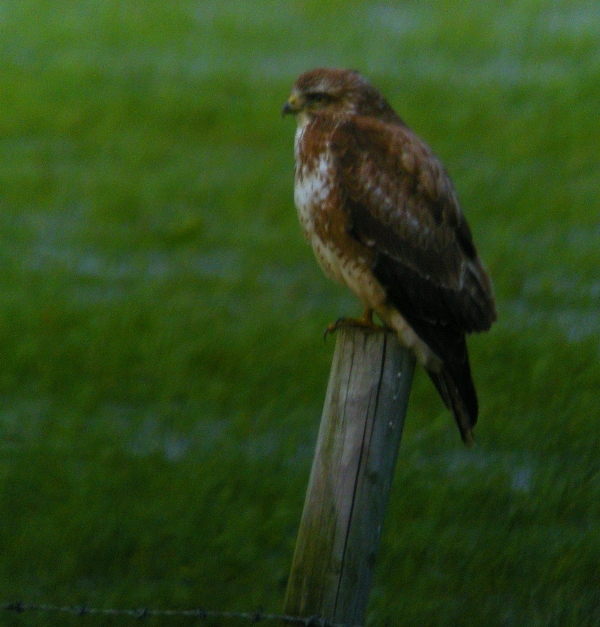 At this point Tom and Marianne left us to make their journey home, the rest of us drove up to Swell Woods to look for a couple of woodland species. The feeders in the car park were very active, we added Nuthatch and Treecreeper to our trip list during our short stay.

At 3pm we set off for the train station at Yeovil arriving in good time for the 4 o'clock train for my remaining clients Barbara, Lucy and Francis. The trip was over, we had seen 92 species, had atrocious weather at times but everyone loved the tour.