A garden watch for half an hour this morning produced some nice sightings, my fence was littered with Red-legged Partridges and just like the Pheasants they will not drop down into the garden for the seed I have thrown out. 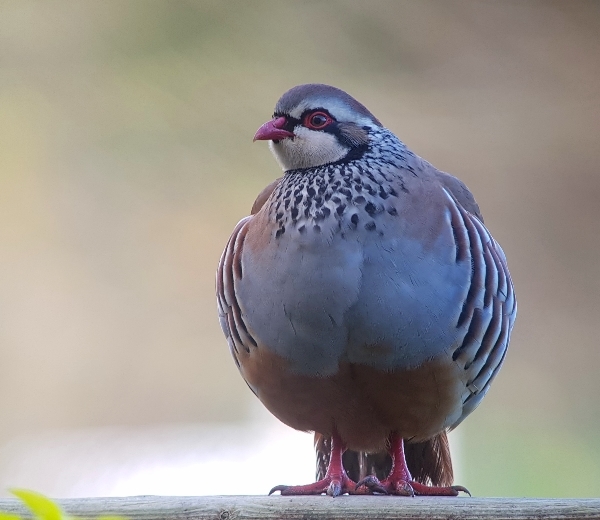 I scanned the meadow and the trees that border it finding Redwings and a pair of Jays. 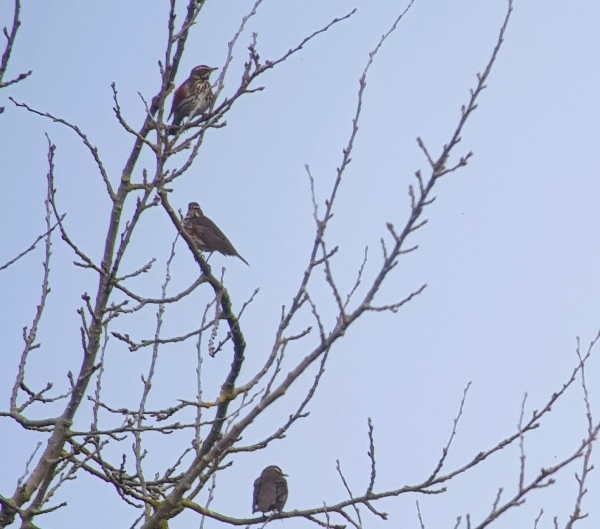 distant shot of some of the Redwings in the meadow trees

For once the Jays sat still and preened for a while but they were distant. The usual crowd of Wood Pigeons fed in the grass meadow and a few Herring Gulls joined them. 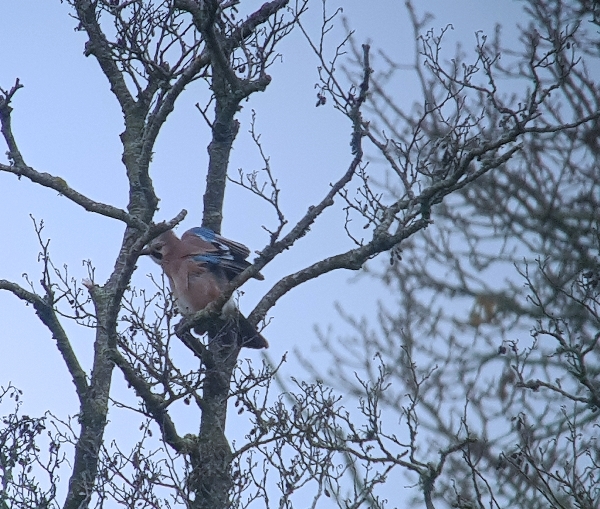 I watched one of the gulls doing the foot-stomping action, sort of running on the spot! This is a method of drawing up worms to the surface, the gull was very successfully getting his breakfast. 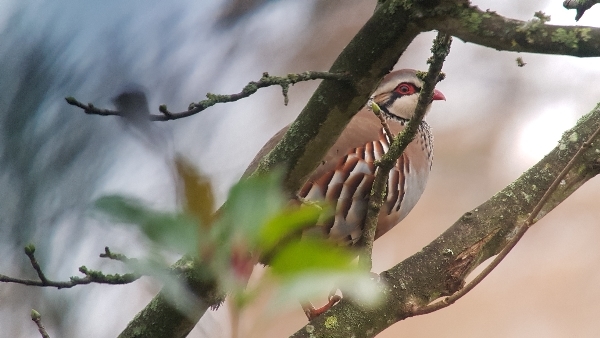 At the feeders I had the usual Nuthatch, Great Spotted Woodpecker, Blue, Great and Coal Tit, Goldfinch and Chaffinch. Also in the garden were Blackbirds, Robin and Dunnock a few Jackdaws loften and in the sycamore trees high above me and today a pair of Magpies joined them.

Dawn and I left home at around 10am for a drive down to Uplyme on the coast, we planned to walk from Uplyme to the seafront at Lyme Regis by following the well-trodden path along the River Lim. I took my binoculars to look for Dipper and Grey Wagtails along the river and any woodland/garden species in the mature trees along the way.

In actual fact we saw very little along the way, nothing on the river and very few birds in the trees and scrub, it was not until we reached Lyme Regis that I saw my first Grey Wagtail.

We sat in deck chairs and drank hot chocolate on the sea-front, it was very quiet, not many people around but I still had to queue for the drinks!! Dawn then went off to the shops whilst I wandered around to the Cobb looking for Purple Sandpipers (the species I missed yesterday at Portishead).

Today I was far more successful, it was near high tide when I reached the outer section of the Cobb at Lyme Regis and the Sandpipers were already there on the rocks waiting for me.I used my phone and my binoculars to take a few pictures, the nearest birds were all asleep with their heads tucked over their shoulders, every time one of them peaked out and showed its head I was looking elsewhere! Doh!! I counted sixteen Purple Sandpipers altogether, six were quite close and asleep whilst the distant ones were wide awake but too far off for a decent picture. 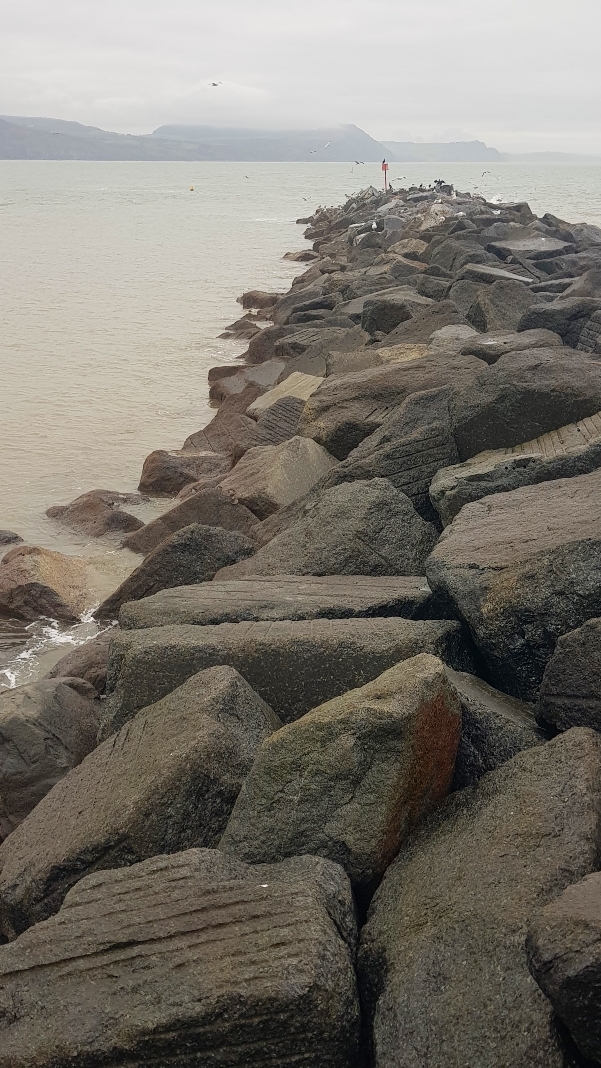 Also on the rocks were Greater Ringed Plover, Ruddy Turnstone, Cormorants, Shags, Herring Gulls and Greater Black-backed Gull. Around the harbour wall I saw several Rock Pipits and one or two Pied Wagtails.

We then walked to our favourite fish and chip shop and bought our traditional lunch which was eaten in a nearby Garden of Remembrance. 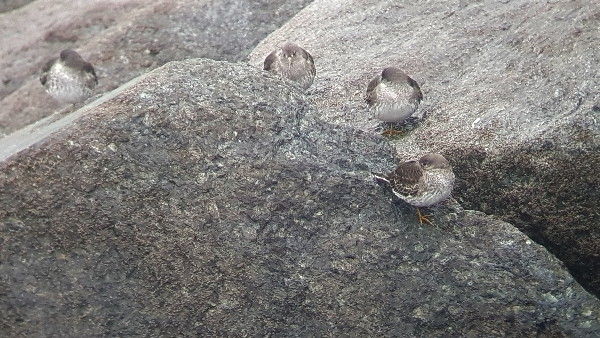 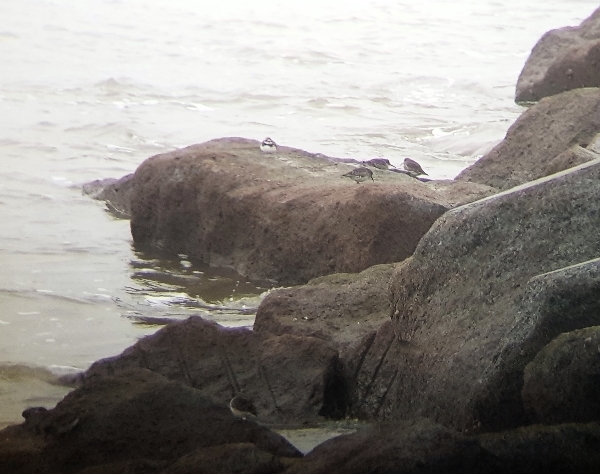 a Ringed Plover with more of the Purple Sandpipers

Before we walked back to the car we walked the length of the High Street (a steep climb) to look for a few odds and ends for Christmas. We saw a Grey Wagtail on the High Street.  Our walk back to Uplyme was far more interesting as far as bird sightings was concerned because we saw quite a few species. Grey Wagtail on the river and an interesting mixed flock in the bushes grabbed our attention for a while. We saw a flock of 20+ Long-tailed Tits and with them was: Blue & Great Tits, Goldcrest and a Treecreeper.

Later we saw Great Spotted Woodpecker and we heard a Nuthatch. The light was beginning to fade as we got back to car and a little drizzle of rain began to fall.