Dawn and I are taking a two week break ‘up north’, our first week will be spent in a small village in Yorkshire, called Bubwith. The property where we are staying has a huge garden that backs onto the banks of the River Derwent, we drove up yesterday, taking our time at a leisurely pace, arriving around 3pm.

I found myself wide awake at 5am this morning! So, I birded the garden for a while and found dozens of Wood Pigeons, Collared Doves, Starlings, House Sparrows and family parties of Blue & Great Tits, Chaffinches, Bullfinches, Blackbirds, Robins, Wrens and Dunnocks. 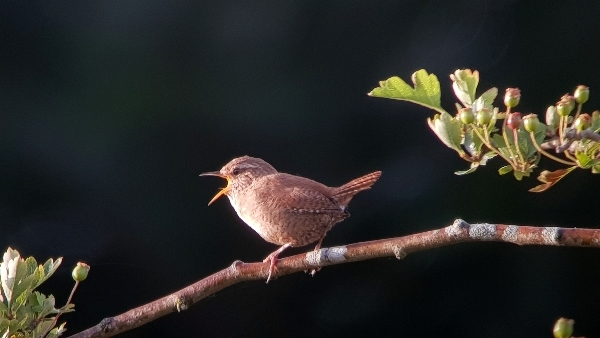 a noisy Wren this morning in the garden 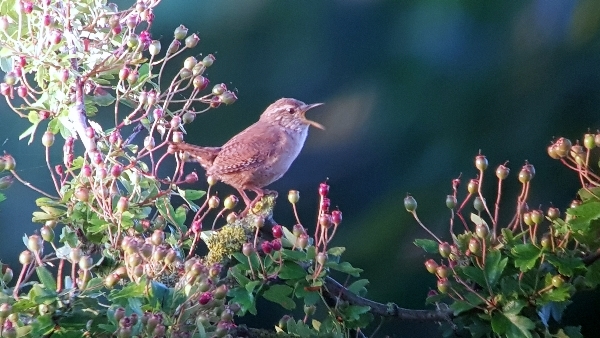 Above me I saw Swallows, House Martins, Swifts, Jackdaws, Crows and Rooks, I could hear at least 3 Song Thrushes singing and nothing else was in song.  At the river more birds were singing I heard Chiffchaff, Blackcap, Wren and another Song Thrush. As I progressed along the raised river bank I found a family party of Reed Buntings (the male was singing) and at least two Sedge Warblers were singing and performing their flight display. 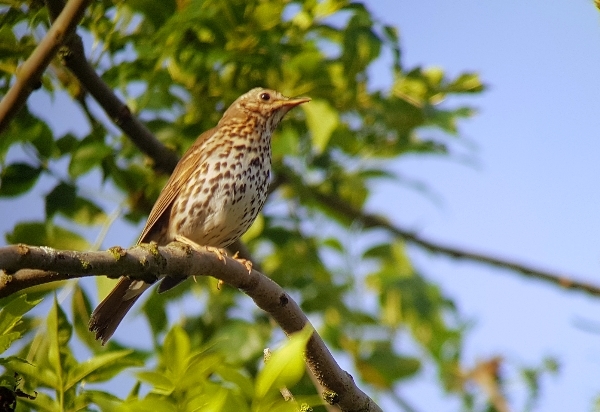 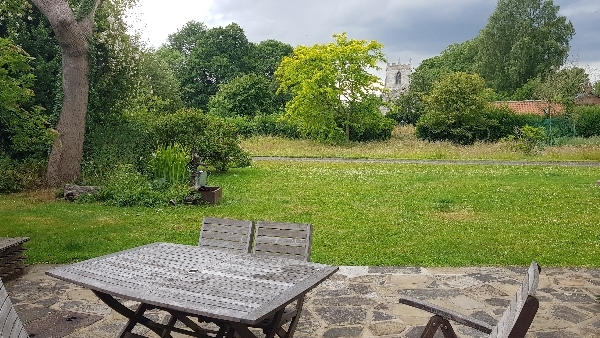 A party of 12 Long-tailed Tits dashed along the hedge alongside the river but, I saw very little actually on or near the water. It looked ideal for Kingfisher and Otter but not even a Moorhen stirred the flat-calm water. 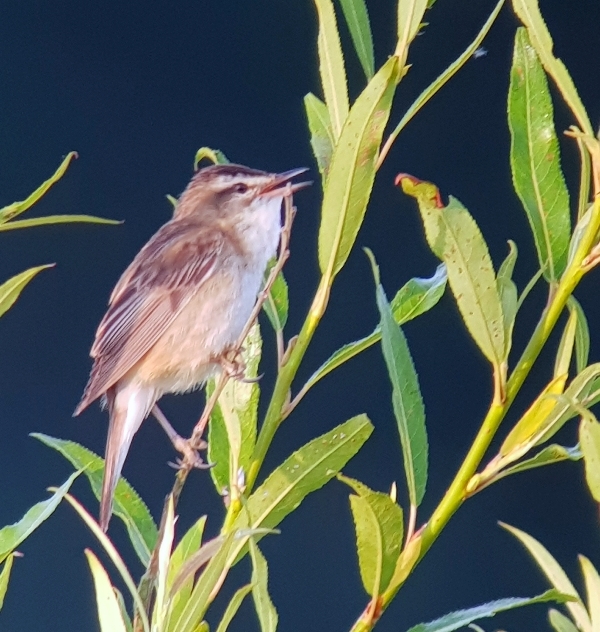 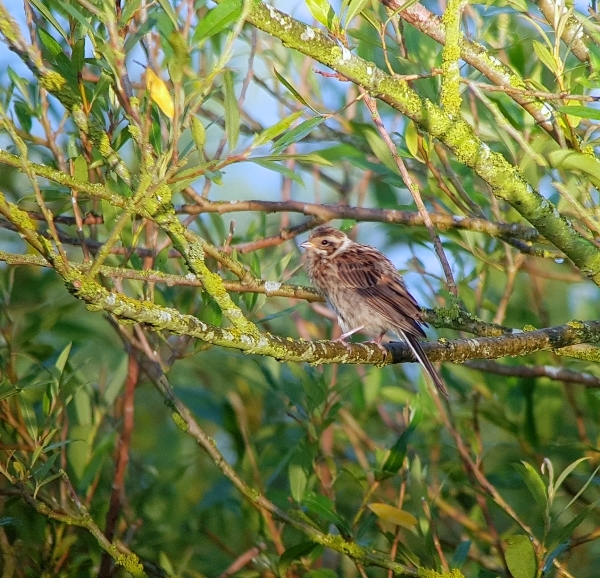 On returning to the garden I retrieved my Wildlife Camera which I had set up last night next to a small garden pond. My photos revealed that we had been visited by two Hedgehogs and a young Fox, as well as a Cat!! 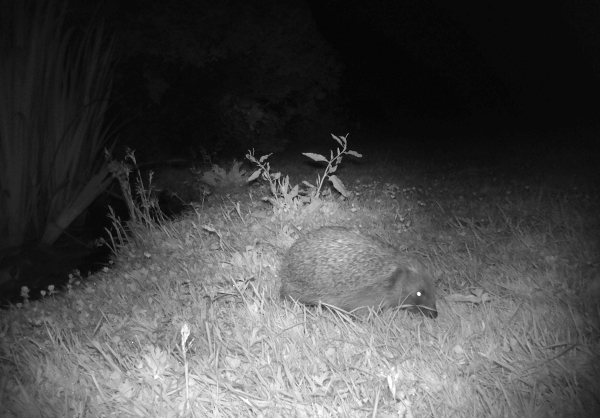 caught on camera - a nocturnal visitor to the garden - Hedgehog

Dawn wasn’t feeling very well at all this morning and she decided to stay in bed!! What could I do?? An Albatross and a Red-tailed Shrike were showing at Bempton Cliffs less than an hour away!!! Could I leave my ailing wife all alone and go birding? Unfortunately the answer was yes I could and did!

I arrived at RSPB Bempton Cliffs at 8:30am and began the long walk back down the approach road to the site where the shrike had been seen earlier today. It was a long walk once I reached the track which in itself was along walk from the Reserve. 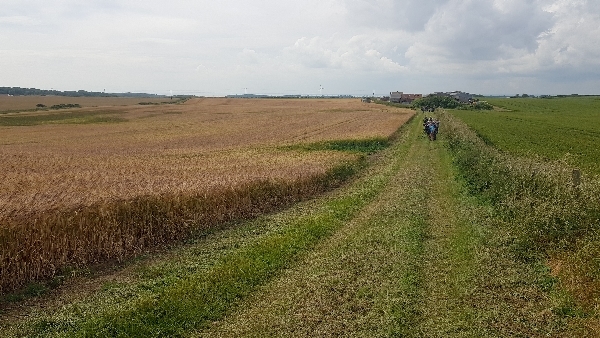 I met a group of birders that were scanning the fields around a farm, the bird hadn’t been seen for a while. The farmer drove up to us and said we could walk down to the farm and see the bird from his yard if we made a donation to charity, which we all promptly did.

I had noted Yellowhammers, Corn Buntings, tree Sparrows, Skylarks, meadow Pipits, Stonechat, Common Whitethroat, Goldfinches and Linnets up this point. We joined about fifty other birders in the farmyard, the bird wasn’t showing and hadn’t for at least 20 minutes. 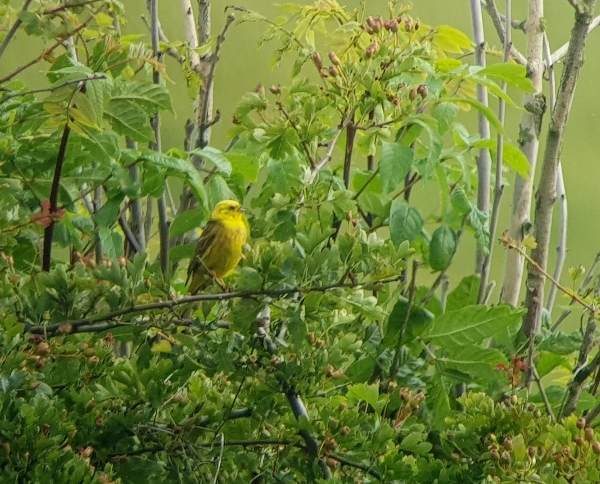 record shot of a male Yellowhammer

The group began to disperse and extend the search to other fields, a couple of false alarms had people dashing this way and that. I walked down the track towards the coastal path, I saw the Shrike on top of a bush about 10 meters behind a birder!! 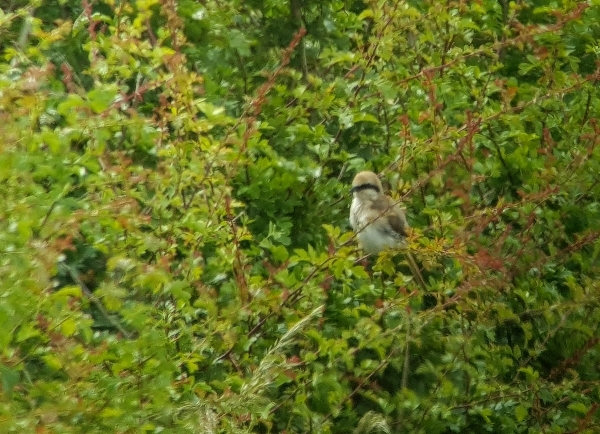 record shot of the Shrike

Once I alerted all the birders around me where the bird was I had good prolonged views of it and followed it as it made its way along the hedgerow. Eventually it came close enough for me to get some record digi-scope pictures. 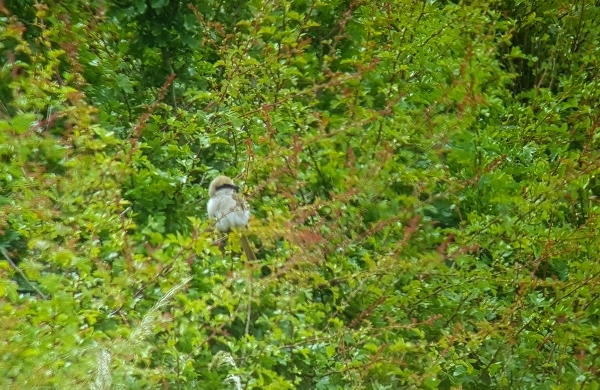 Job number 1 done, so now where was that giant Great Black-backed Gull that everyone is calling an Albatross? Well, a short walk along the track brought me to the viewing platform where Albert Ross had been seen most days. I spent an hour looking from there, no-one had seen him since 7am dozens if not hundreds of people were looking.

twitchers in the farmyard

Nevertheless, I had a lovely time watching all the other thousands of birds milling about along the cliffs. So many Gannets breed there alongside Guillemots, Razorbills, Puffins, Kittiwakes, Fulmars, Cormorants, Shags, Rock Doves and Herring Gulls. I then made my way up to the visitor’s centre at 12:30pm I had been out for 4 hours so far and I was hungry. 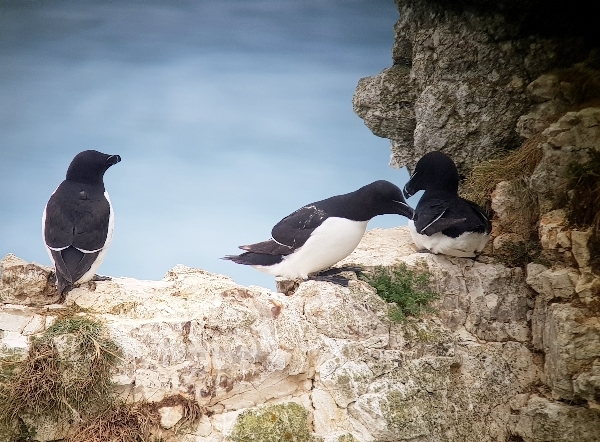 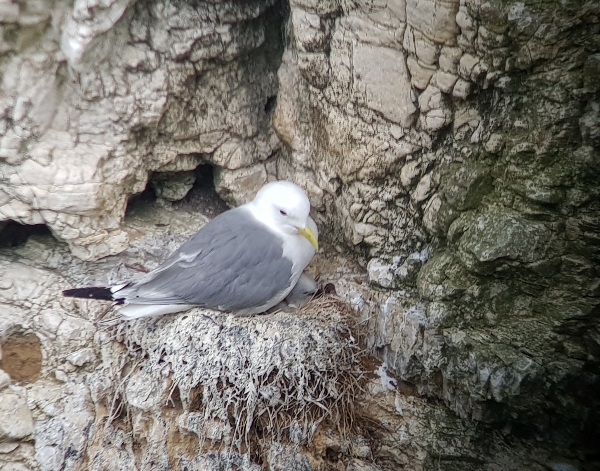 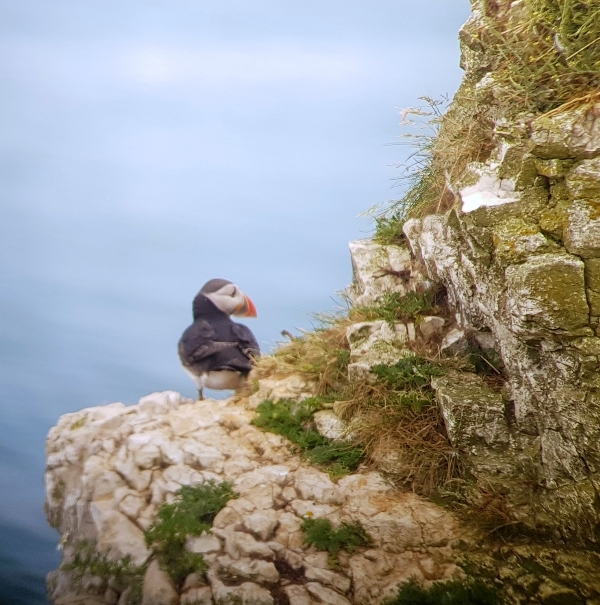 I ordered a coffee and a sandwich and sat to eat and drink when a call went up that Albert was back, doh!! So off I went back down to the cliffs and from the first viewing platform I was able to see the giant bird drifting around the cliff-face. Hooray!! Now all those of you that sent me your pictures of this bird thank you, because I’m sure that without them I would never have seen it!! 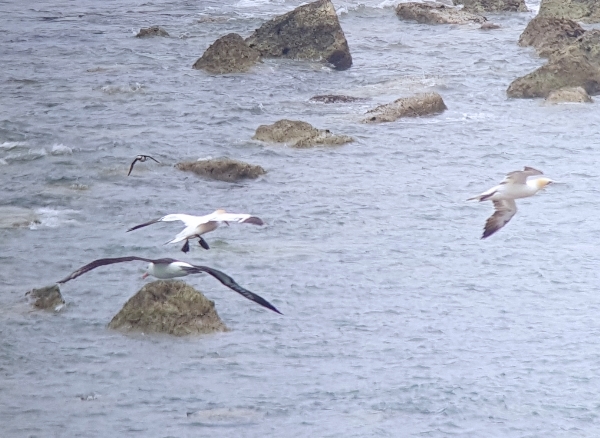 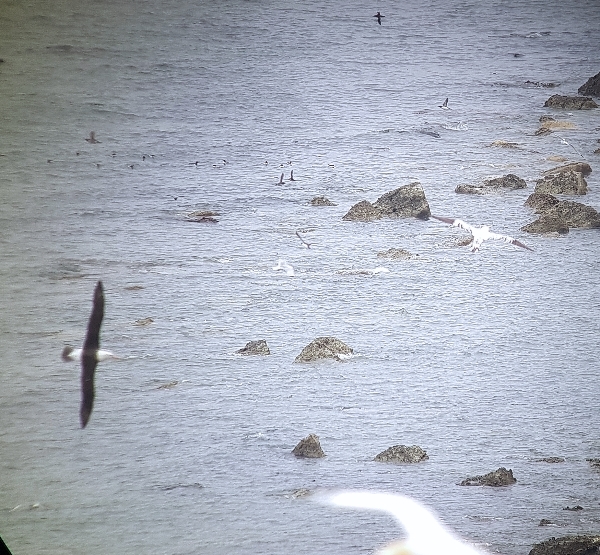 I phone-scoped a few very distant pictures, the bird would circle around for a while then land out of sight only to return five minutes later, it did this several times and allowed me to set up my scope and phone in readiness. 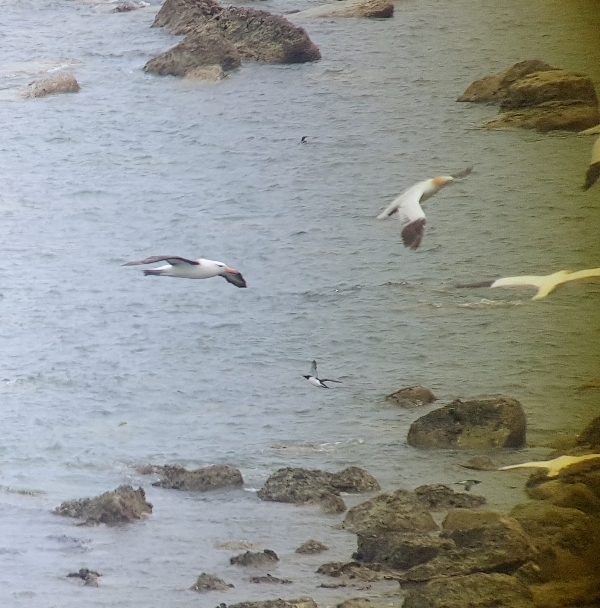 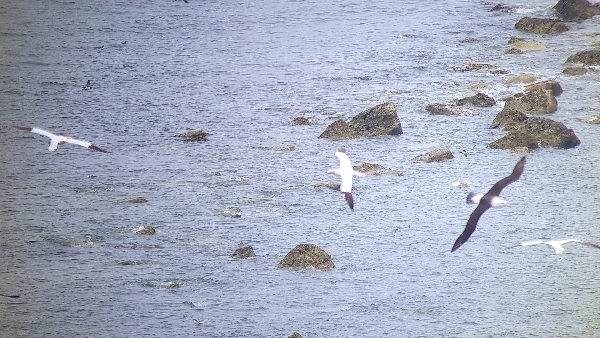 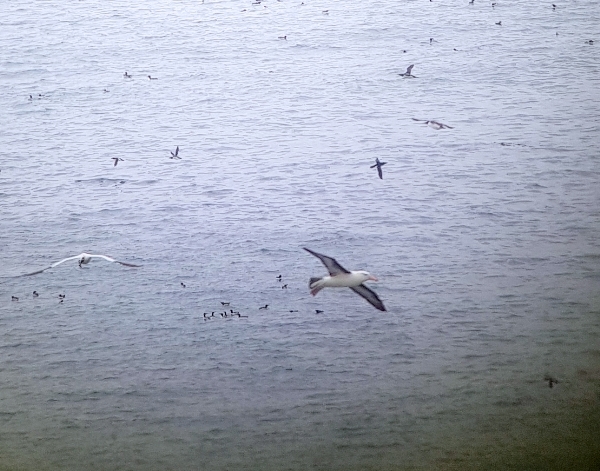 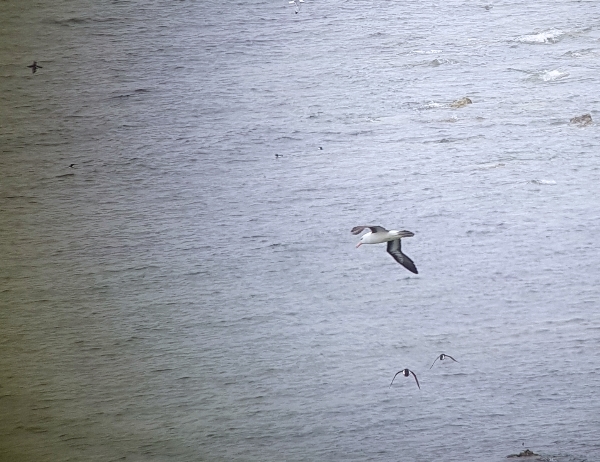 It was around 2pm that I finally set off for home, it had been a great morning, two UK lifers in one morning, wowzah!! 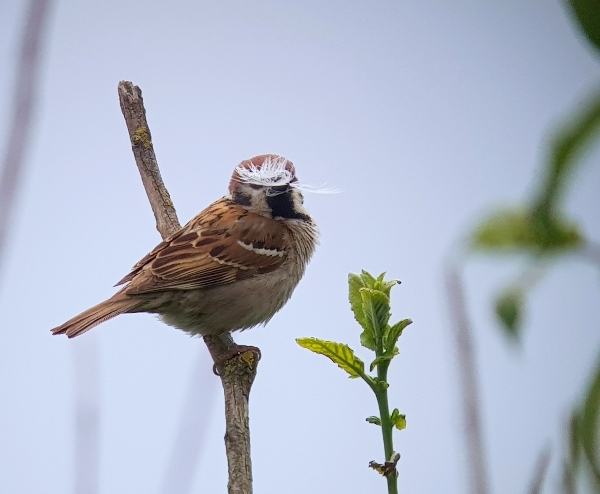 can anyone tell me what this species is?

Dawn had slept most of the morning, she was up and about and feeling a little bit better but we never ventured out for the rest of the day, just relax, aaahhhhh!!