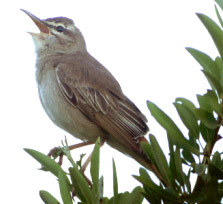 This tour includes the Paraje Natural of Soto Grande, encompassing the banks of the Rio Guadiaro and the Laguna Torreguadiaro, a small woodland at San Enrique and a Moorish castle within the boundaries of the Parque Natural de los Alcornocales.

At Soto Grande a series of boardwalks provide excellent views over the lagoons, reedbeds, marshes and the shoreline. The Purple Swamphen breeds there and it is a good site for wintering Penduline Tits and Bluethroats. Other birds found in the winter may include Wryneck, Buntings (Cirl and Reed), Flamingos and many ducks and waders.

During spring passage and the summer you will see Terns, Egrets , Herons, Little Bittern, Stilts, Shrikes, Martins and Warblers. Birds of prey could include; Harriers, Kites, Buzzards, Ospreys; Vultures and Eagles may drift overhead at anytime.

After leaving Soto Grande a short drive will take us to the broadleaved woodland of San Enrique, this mixed woodland is a good place to catch up with many woodland species and can be excellent at anytime of the year. There are also surrounding farmlands, meadows and orchards to search and the wood is bounded on one side by the Rio Guadiaro giving a wide variety of habitats.

The residents of this area include; Jays, Woodpeckers, Short-toed Treecreepers, Warblers, Finches and Larks. These are boosted in the summer by Turtle Dove, Nightingales, Melodious Warbler, Cuckoos and Golden Orioles.

The river attracts Egrets, Herons, Kingfisher, Plovers, Swallows, Swifts and Martins, whilst the Bee-eater can be seen at a large colony which is found in the sand banks of a local sand quarry.

Driving further inland we head for Castellar del la Frontera another white village (though much larger than Gaucin and Casares) which nestles on the hillside and borders the “Parque Natural de los Alcornocales”. During spring and summer we can look out for Storks on their nests on top of the roadside pylons as we wind up the valley of the Rio Hazgarganta towards Castellar. From the village we drive up to the Castillo (castle), stopping to view a wooded valley and stream where a colony of Monarch Butterflies can be found. The Castillo sits on a hill-top and gives fantastic panoramic views of the surrounding hills sides and overlooks the Guadarranque reservoir.

The bird-watching in this general area is tremendous and several sites will be visited. The rocky hillsides hold Blue Rock Thrush, Sardinian, Dartford and Melodious Warblers, also Cirl Buntings and in summer we may be lucky enough to find Rufous Bush Robin and Spectacled Warbler. From the Castle we can look for Crag Martin, Red-rumped Swallow, Pallid, Alpine and White –rumped Swift (from mid-May). Lesser Kestrels give excellent views as they perch on the castle walls and the raptor watching over the surrounding area can be superb. Bonelli’s, Booted and Short-toed Eagles, Black and (occasional) Red Kites, Peregrines, Sparrowhawks and both Kestrels may join the Griffon and Egyptian Vultures.

Other sites in the area include forest, river and scrubland habitat and in spring and summer we may add Montagu’s Harrier, Orphean, Olivaceous, Melodious Warblers and during passage Pied Flycatcher and sometimes Roller may be seen.

An excellent all round trip with a good variety of habitats to visit and an exciting list of birds to boot.