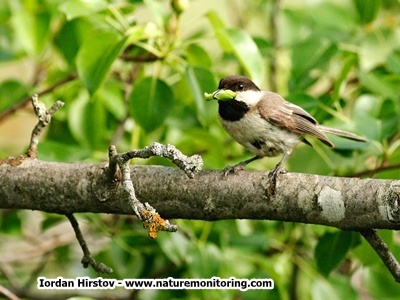 Join us as we explore some of the most beautiful, bird-rich landscapes in Europe, we take in the Rhodopes Mountains the Black Sea Coast and the Central Balkan Mountains, these three exciting regions form the backbone of the tour. We make many exciting stops along the way to view the wonderful and valuable habitats that Bulgaria has to offer.

Bulgaria stands at the crossroad on the Balkan Peninsula which 'separates' Europe and Asia and because of this it is one of the best European birdwatching destinations. It is the gateway to many eastern European species and several Asiatic species which are found on the western-most edge of their range. There are a vast range of habitats to discover and over 420 species have been recorded there, it is not uncommon to record 200 species during a 9 day tour such as ours.

For some of the Eastern European breeding species Bulgaria is simply the best destination there is; Levant Sparrowhawk, Pygmy Cormorant, Semi-collared Flycatcher, Masked Shrike, Sombre Tit, Syrian Woodpecker, Olive-tree and Paddyfield Warblers can all be found on this tour.

Bulgaria sits right beneath two of Europe's busiest migratory routes; the Via Pontica and Via Aristotelis and even during this late spring period you can still observe migrating birds, Honey Buzzards and Lesser Spotted Eagles, White and Black Storks, White and Dalmatian Pelicans can pass in their thousands at this time of the year.

After collecting our comfortable bus, complete with Bulgarian driver, we head directly into the nearby Vitosha Mountains to search for our first target species, The Spotted Nutcracker. It is one of the most sought-after European species and we have a great chance of seeing it. 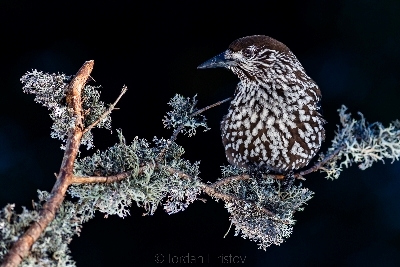 Also, around the ski resorts where we look for the Nutcracker we may find:  Ring Ouzel, Firecrest, Goldcrest, Willow Tit, Common Crossbill and Eurasian Treecreeper.

We shall stop for a snack before we head off to Western Rhodope Mountains: an area of vast coniferous forested mountain tops where wilderness dominates. The pine-clad steep hills are occasionally cut by streams and rivers forming deep gorges and vertical cliff faces.

One of them is the magnificent Trigrad Gorge, it is perfect habitat for the Wallcreeper. The limestone cliffs are ideal places for this charismatic species. The area also holds Alpine and Pallid Swifts, Crag Martins are often seen as they wheel their way along the cliff faces. White-throated Dippers, both Grey and White Wagtails make frequent sorties along the crystal clear mountain rivers. 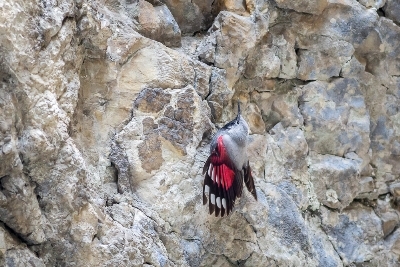 We find a complete contrast as we enter the Eastern Rhodopes Mountain region, here we find rough terrain consisting of towering limestone peaks, rock strewn slopes with open areas devoid of trees and plant-life. This is the realm of the spectacular Vultures, Griffons are joined by Egyptian and occasionally Black Vultures. We will also see many Black Storks nesting on the cliffs and the Chukar often puts in an appearance as they frequently stand on top of rocks as though guarding their territory.

Many other species that are typically Balkan birds can be seen here, such as; Red-rumped Swallow, Black-eared Wheatear (Eastern race), Blue Rock Thrush, and a good variety of warblers, namely: Eastern Orphean, Subalpine Sardinian, Eastern Bonelli's and Eastern Olivaceous Warblers. We may also see the Sombre Tit, the Barred Warbler and the Black-headed Bunting, which are all fairly common, and the Ortolan Bunting can be heard everywhere. Rock Nuthatches bring the warmth of the south. Their peculiar nests are always enjoyable to observe. 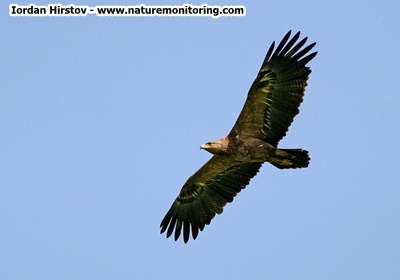 As we drive to the southern Black Sea coast we will stop in the Sakar Hills and Western Strandzha Mountain range, where we will be looking for the Eastern Imperial Eagle, Levant Sparrowhawk, Masked Shrike, Olive-tree Warbler and Eastern Orphean Warbler. The Sakar is an area of rounded hills and open valleys, a lowland area of open grassland with scattered trees and bushes where Sousliks often dash across. It is the stronghold of the Eastern Imperial Eagles.

Birds of prey sighting will dominate as we pass through this rolling countryside, we will often see Booted, Short-toed and Lesser-spotted Eagles as they glide and soar in search of food. However, the wooded hill-tops in Strandzha also provide shelter to the Semi-collared Flycatcher, one of our must-see species. The area is also excellent for most of the European Woodpeckers, whilst Rollers, Bee-eaters, Hoopoes and Black-headed Buntings are often encountered along the telegraph wires.

Once we arrive on the Black Sea coast we will explore the lakes around the city of Bourgas. There we find an extensive mosaic of wetlands that form one of Europe's richest bird areas – here is found the Poda Reserve which has the impressive list of over 260 bird species which is amazing for a territory of only 1 km².

The Pomorie and Atanassovko lakes are shallow and saline (traditional salt pans), they are a magnet for a huge number of birds, especially during migration time. A great number of waders may be present during our visit, including; Curlew Sandpipers, Black-winged Stilts, Kentish Plover and a couple of species rarely encountered in Western Europe, the Broad-billed and Marsh Sandpipers. There are also Slender-billed and Mediterranean Gulls to look for as well as Gull-billed and Sandwich Terns. The highlight of the area are the White and Dalmatian Pelicans and the Pygmy Cormorants.

As we head north along the coast we will pass through the Goritsa oak forests in the Balkan Mountain's easternmost part and the unique Kamchia riverine forests. Here we may see Black Stork and Lesser Spotted Eagles soaring above the forest and during a walk in the forest we will look for Grey-headed & Middle Spotted Woodpeckers,. This area is also a stronghold of the Semi-collared Flycatcher, so if we haven?t seen it already we should find it there. 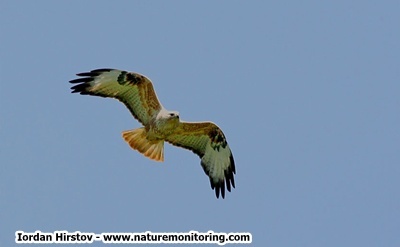 Now at the northern coast, we will dedicate a day to the steppes and cliffs of Cape Kaliakra, which, besides being a spectacular sight, is a place hosting the Rose-colored Starling, the Pied Wheatear and the five species of larks, typical for the Balkan peninsular - Calandra Lark, Short-toed Lark, Skylark, Crested Lark and Woodlark. The Stone Curlew, the Lesser Grey Shrike and the Isabelline Wheatear find refuge in the steppe vegetation, while the coastal cliffs are populated by the European Shag (ssp desmarestii), Eagle Owl and the Long-legged Buzzard. In spring, Mediterranean Shearwaters often fish in the sea close to the cape, attacked by Arctic Skuas. We may be lucky to witness this.

Another major birding area on the northern coast is that of the Shabla and Durankulak wetlands close to the border with Romania. The two lakes are one of the few places in Europe where the Paddyfield Warbler, a typical Asian species, can be easily seen breeding. Another 80 bird species breed in the region of the two lakes, the most interesting of them being the Ferruginous Duck, Savi’s Warbler, Squacco Heron, Purple Heron, Marsh Harrier, and other goodies. Along the shore of the sea often Red-footed Falcons are seen. Lesser Grey Shrikes are one of the most common shrikes of the area. At the lakes we can expect all species of Heron, Little Egret, Pygmy Cormorant, other migrating & summering species of waders, gulls and terns.

During the trip back to Sofia we will see a lot of White Storks on their nests and European Roller, Bee-eater, Hoopoe, Syrian Woodpecker, Eastern Olivaceous Warbler, Yellow Wagtail (Black-headed subspecies) Spanish Sparrow, Black-headed Bunting, and Ortolan Bunting. These latter species are almost everywhere in the lowlands.

What is included in the tour!

What is not included?

For advice on flights please call or e-mail us, do not book your flights until we have confirmed that the trip is going ahead.