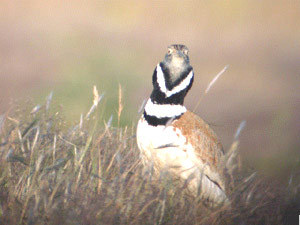 Join WINGSPAN on tour of this little known area of Spain. See the wonderful array of birds, butterflies and wild flowers that inhabit this unique region during the springtime .

Explore the ‘dehesa’, a lattice of rich pasture and flower meadows, sheltered by an umbrella of finely spaced cork and holm oak. Up to 70 species of bird breed in this rare habitat wild boar and deer  feed in the leaf litter beneath these trees.

Search the wide-open grassland of the Spanish Steppe for Bustard, Sandgrouse, Larks and the Raptors that prey on them. 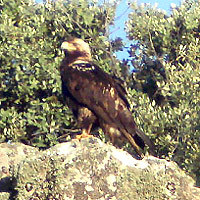 and other riverside species. Visit the reed fringed rice fields and lakes for gulls, terns, waders, warblers and one or two specialities. Many species of wildfowl invade the area during winter and remnants of large flocks of ducks may be found on the lakes and reservoirs.

During this late May tour there is an added bonus with two days exploring the Gredos mountains north east of Extremadura where a whole new variety of species can be found. Including the spectacular Common Rock Thrush, the dazzling Bluethroat and the dainty Ortolan Bunting. Plus many more.

Your spring bird list will include between 130-150 species, ranging from the diminutive Firecrest to the magnificent Spanish Imperial Eagle. Up to 19 species of raptor may be recorded, and those, together with the colourful splendour of Bee-eaters, Hoopoes, Golden Orioles and Iberian Magpies will make for a really exciting tour.

Day 1. Arrive at Madrid, then transfer to Extremadura, birding along the way 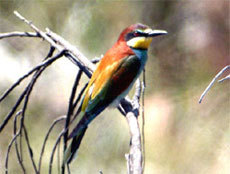 Leaving the chilly English spring and arriving in a warm and sunny Madrid will lift your spirits and re-double your enthusiasm, and after quickly acquiring our vehicle and a hasty unpacking of telescopes we will soon be heading off on our dream tour of Extremadura as the first part of this duel destination Tour. Once on the motorway the traffic thins out and we will begin to pick out one or two birds, such as Spotless Starlings, White Stork and perhaps Black Kites.

After a short while we will make a break for lunch and then a birding stop around Jaraicejo. We visit the heathland above the village where Spectacled and Dartford Warblers are main target species.

Bee-eaters will be in evidence, almost everywhere, and along the road we should pick out more raptors, perhaps Black Kites and Common Buzzards in good numbers, as well as Red Kites, Short-toed Eagles, maybe a Booted Eagle, a few Kestrels and plenty of Cattle Egrets. Further on, in the dehesa we may find our first Iberian Magpies and our first Golden Orioles.

Leaving Jaraicejo we drive on the old A5 which runs parallel to the motorway as we head for our accommodation near Monfragúe National Park. We eventually arrive late afternoon,  The local area and quiet lanes hold 20-30 species and will keep us occupied for the rest of the day. Even as you go to bed, Scops Owls may be calling from the nearby olive grove and perhaps the strange call of a Red-necked Nightjar may also be heard.

Day 2. Dehesa and Steppe around Monroy 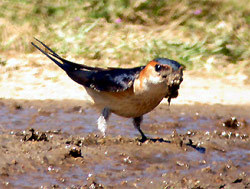 A pre-breakfast walk along a quiet track will enable us to acquaint ourselves with the many species associated with the area, especially Iberian Magpies which will be ever present throughout our stay. We may also enjoy excellent views of Golden Oriole, the call of the Hoopoe will be a constant background sound, and the local Sardinian Warblers and Melodious Warblers will try their best to compete with Nightingales as they sing their hearts out in nearby hedgerows. The  constant sight of vultures, eagles and kites drifting over us and the call of Bee-eaters will enhance a cacophony of new sounds to further excite your eardrums and increase your appetite for more.

After breakfast we head out towards Monroy keeping to the quiet tracks and little used roads across the rolling plains of the Steppes. There we will search for many specialised species that have adapted to this sometimes harsh, dry environment. We can enjoy the display flight of many Calandra and Thekla Larks trying separate them from the ubiquitous Crested Larks. There will also be Short-toed Larks, Woodlarks and Black-eared Wheatears to look for as well as Great Spotted Cuckoo and, of course, Little and Great Bustards. Shrikes will be represented by the Woodchat and Iberiann Grey varieties and everywhere the sky will hold raptors. On the steppe it will be mostly Black Kite, Griffon Vulture, Red Kite, occasional Black Vulture, with Montagu’s Harriers, Kestrels and Common Buzzards giving the closest encounters as they quarter the fields or sit on fence posts. We visit the Rio Magasca and Rio Almonte where we can watch Crag Martins and Red-rumped Swallows at close quarters as they dart around us. We can listen for Serins and Cirl Buntings singing from the valley slopes and watch for waders such as Little Ringed Plovers, Common and perhaps Green Sandpipers along the river. Black Wheatear are sometimes seen there, as well as Common Kingfisher and Grey Heron. 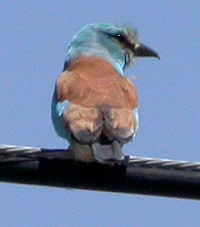 Just north of Monroy we will search for Black-winged Kite and other raptors such as, Short-toed Eagle, Booted Eagle, Common Buzzard and Black Kite, a pair of Spanish Imperial Eagles breed close by and with luck they will be in attendance at their nest site.

Today will be the highlight of the tour, a trip to the Montfrague (pronounced Mont-frag-way) National Park, this magical wilderness hosts a wide variety of birds, plants, butterflies and animals. After a beautiful but short drive north from our hotel, crossing over rivers we eventually reach the park boundary, this trip can take 15 minutes or two hours, it depends on what we see en-route. Once into the park we will stop at the Arroyo de la Vid and look for Kingfisher, Grey Wagtail, Sardinian, Dartford and Subalpine Warbler, there are also one or two pairs of Spanish Sparrows that build their nests on nearby telegraph poles and Rock Sparrows are often encountered here. 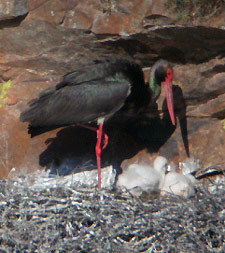 We eventually arrive at the base of the Castillo de Montfrague our second stop in the park, from there we can walk to the Castillo which offers spectacular views of the surrounding area and close views of Vultures (they pass below you), Crag Martins and Red-rumped Swallows. WHITE-RUMPED SWIFTS can often be seen above the Castillo at this time of the year.

Black Storks breed below us, giving an added a bit of variety. Moving on further into the National Park, we will stop to search the Peña Falcon (a huge pinnacle of rock) where Eagles, Vultures, Peregrines and Black Storks have breed since recording began. Various other places of interest will be visited including Puente del Cardena, Portilla del Tietar and our birdlist will be enhanced with the likes of Rock Bunting, Blue Rock Thrush, Hawfinch, Crested Tit, Alpine Swift, Rock Sparrow, Red-billed Chough, and possibly Black Wheatear.

But it the birds of prey that give Montfrague its fame, with several Eagle species on show, Vultures, Falcons, Buzzards and the possibility of a early evening Eagle Owl sitting on a rocky outcrop. After a full and exciting day we begin our journey back to Trujillo and on to Finca Santa Marta with ample time to reflect on a memorable day’s bird watching.

After an early breakfast on our last day at Monfragúe we set off to the Southern part of the Province of Ávila. We head towards the highest points of the Sierra de Gredos, where the altitude will have a pleasant cooling effect on the temperature after the hot sunny days on the steppes. We will travel through the Monfragüe Natural Park once more and will make one or two stops to supplement our growing list of species. We will stop at Peña Falcón where we will reacquaint ourselves with the resident vultures and breeding Black Storks. 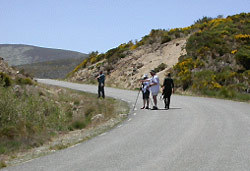 We continue on towards the Sierra de Gredos, passing by Plasencia and then gaining altitude as we drive up the Valle del Jerte.  Soon we will turn off the main road and head towards El Barco de Ávila winding our way up into the upper slopes in search of Ortolan and Rock Buntings and maybe catch sight of the superb Rock Thrush. In the early evening we arrive at our hotel near Hoyos del Espino, travel weary, but full of anticipation as this new environment beckons.

Day 5, all day in the Gredos Mountains

Next morning, some pre-breakfast bird watching will be under taken, the change in temperature will be quite noticeable at that time of the day and we must don our fleeces, or freeze. Citril Finch will be a target species, but Firecrest, Crested Tit, Coal Tit, Common Crossbill, Green and Great Spotted Woodpeckers may be added to our list.

After breakfast we will spend a full day scouring the high altitude slopes, pine woodlands, scrub and fast flowing streams and hopefully add a whole range of new species to our trip list. We will head up towards the Plataforma de Gredos, stopping to look at various birds on the way such as Common Whitethroat, Rock Buntings, Yellow Wagtails and Dunnock. Other birds to be seen will be Western Bonelli’s Warbler, Blackcap and Pied Flycatcher.  On reaching the top we will search for the elusive Bluethroat and other species common to the mountain-tops, such as Rock Thrush, Northern Wheatear, Water Pipit and Yellow Wagtail. Dipper can be found along the streams that flow from the top. Raptors will also be present and we must look for Honey Buzzard, Golden Eagle, Hobby, Short-toed and Booted Eagle. We return to the hotel for dinner after long but satisfying day in the field. 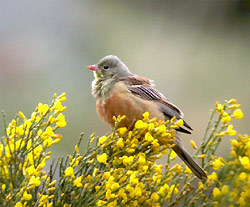 We will have a another chance for an early birding hour before breakfast and for the rest of the day we shall explore further the verdent valleys and pine forests for spec ies of woodland birds such as Flycatchers, Woodpeckers, Tits, Finches and birds of Prey. We shll spend time looking in particual for Citirl Finch, Iberian Pied Flycatcher, Common Redstart, Red-backed Srike, Dipper, Firecrest, Crested Tit, Common Crossbill and many more. We may even drive once again up to the platforma de gredos to look for species we may have missed.

There will be time before breakfast and maybe an hour or so afterwards for some local birding before we have to return to Madrid. We must bid a fond farewell to the Sierra de Gredos and head for the Airport. During departure we can reflect on our never to be forgotten tour of the magical Extremadura & the Sierra de Gredos.

The cost of the tour includes: 6 nights half board accommodation,  (The accommodation is good quality, all en-suite rooms, in superb surroundings), transport throughout and the services of the guide. All fuel, taxes, tolls and entrance fees.

Not included in the price: Return airfare to Madrid, travel insurance, lunches, drinks and other expenses of a personal nature. See full booking conditions.

Flights are great value when booked with budget airlines for this Tour, UK to Madrid. The release date for the summer 2022 Easyjet timetable is usually mid-Sept, but this year 2021, they were published early.  Prices vary but on average a UK return flight will cost between £150 - £180 and sometimes quite a bit cheaper.  the sooner the flight is booked the cheaper the seats are!

Tour price £1050 - single supplement £150. (those willing to share a twin room please let me know). Please contact us using our booking form found here  http://www.wingspanbirdtours.com/contact, or call us on 01935-426152 and ask for Bob. A deposit of £200 will secure your place.