AUSTRALIA "THE LAND OF THE PARROTS" - EAST COAST TOUR 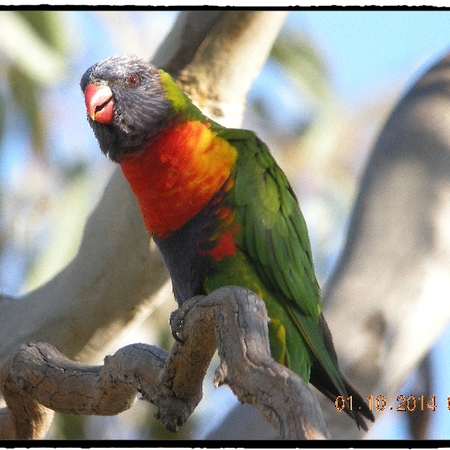 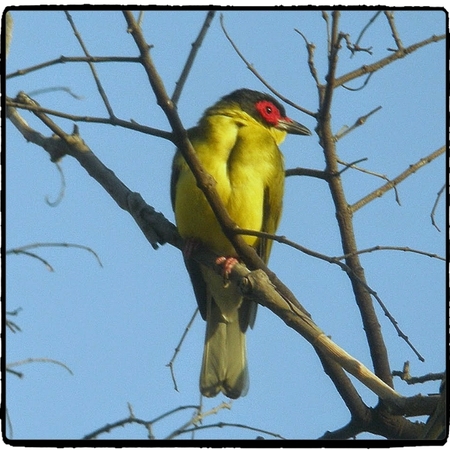 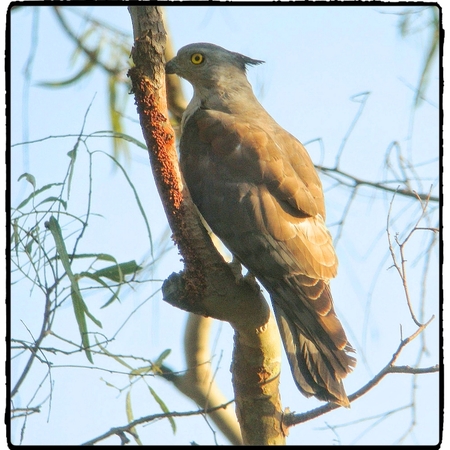 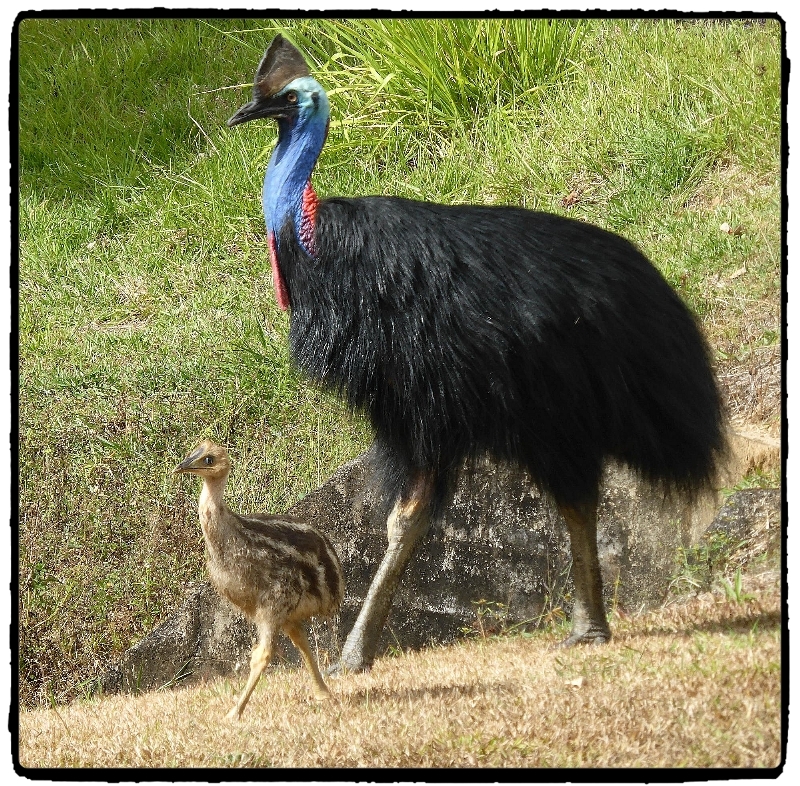 “THE LAND OF THE PARROTS”

Join us for the trip of a lifetime, discover the unique wildlife of this exciting Antipodean destination and ‘meet’ some of the most fascinating birds and animals that you are ever likely to see.

This tour takes in the ‘best of the east’ from the tropical North Queensland to the deep south of New South Wales. 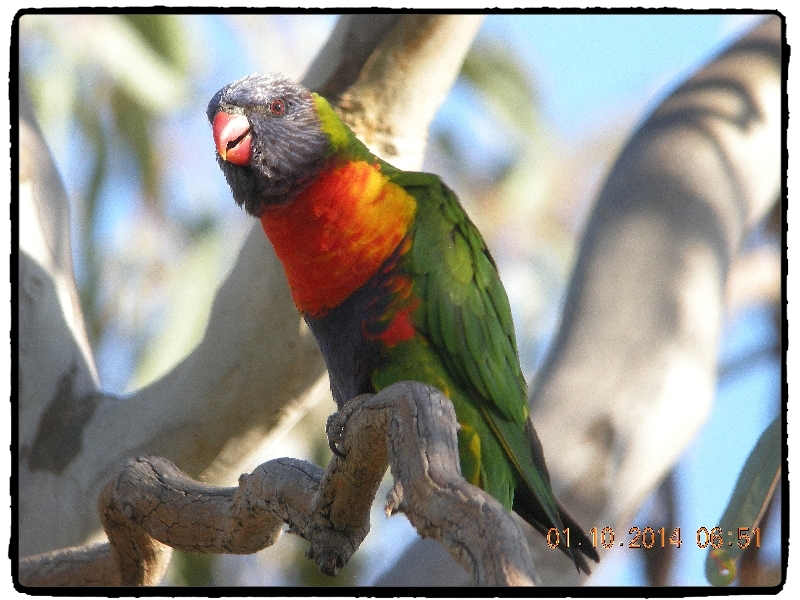 TOUR AT A GLANCE

Price: Price does not include international flights or two internal flights ( Cairns to Brisbane and Brisbane to Sydney) Price is number dependent ranging from 8300 Aus.$ (minimum of 6 people) to 6500 Aus.$ (max 10 people).

PLEASE NOTE: For citizens of most countries, AN ONLINE VISA (ESTA) NEEDS TO BE OBTAINED BEFORE ARRIVAL IN AUSTRALIA

This tour itinerary includes visits to:

There are over 730 species to be found in Australia some 238 species are found nowhere else in the world, that is more endemics than any other country in the world. Alongside these endemics there are over 500 other species that are most likely to be ‘lifers’ for first time visiting birders. Expect to see between 350-400 species on this tour ranging from the gigantic Cassowary to the diminutive Weebill. 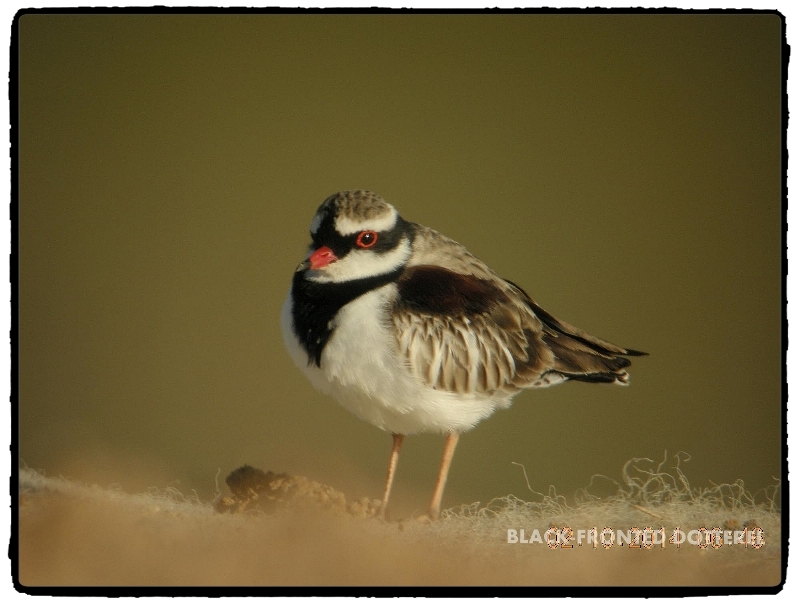 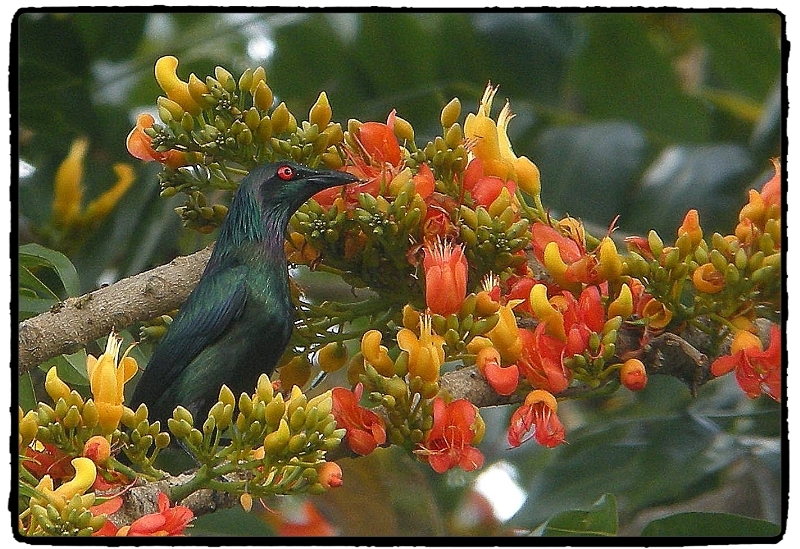 Late in the afternoon we could join the “4 o’clock club” on the Esplanade if the tide is right. This is a unique birding institution in Australia, a daily gathering of birders to look for waders. An after dinner walk along the Esplanade is a good opportunity to see Bush Stone Curlews.

Accommodation for 2 nights Full Board in Cairns.

We leave the hotel at 7.45am to drive to the wharf to board the Ocean Spirit for a relaxing cruise to Michaelmas Cay on the Barrier Reef. The cay is a breeding site for a number of seabirds including Common and Black Noddies, Crested, Lesser Crested, Black-naped, Little, Sooty and sometimes Bridled Terns, Greater Frigatebirds, Brown Boobies and Ruddy Turnstones.  There will be the chance to snorkel on the reef. Snorkelling gear is supplied, including some masks with prescription lenses, and wetsuits are available. You can scuba dive if you are certified but this is an additional cost. There is also a semi-submersible for underwater viewing. This is an all day cruise with a substantial lunch served on board. 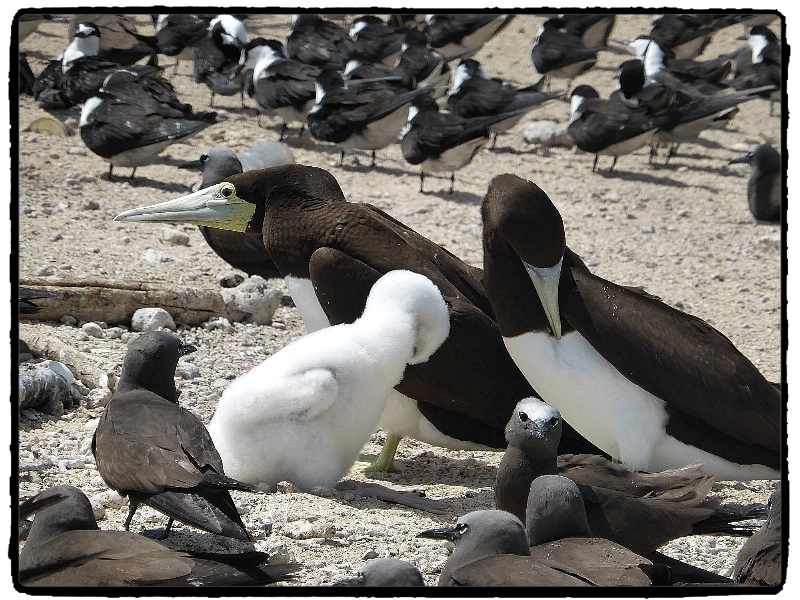 After a final sweep along the Esplanade to see if any new waders have flown in overnight we drive from Cairns travelling north to Daintree Village to our accommodation for the next two nights at beautiful Red Mill House. On the way we visit Tjapukai Aboriginal Cultural Village which provides a fascinating insight into Australian Aboriginal life.  At Daintree an afternoon walk down Stewart Creek Road and around the gardens at Red Mill House should produce some new sightings. Possible birds include Radjah Shelduck,  Emerald Dove,  Beach Stone Curlew, Pacific Baza, Brahminy Kite, Black-winged Stilt, Pheasant Coucal, Channel-billed Cuckoo,  Sacred Kingfisher,  Lovely Fairy-wren, White-bellied Cuckoo-shrike, Torresian Crow, Fairy Martin and Nutmeg and Chestnut-breasted Mannikin. 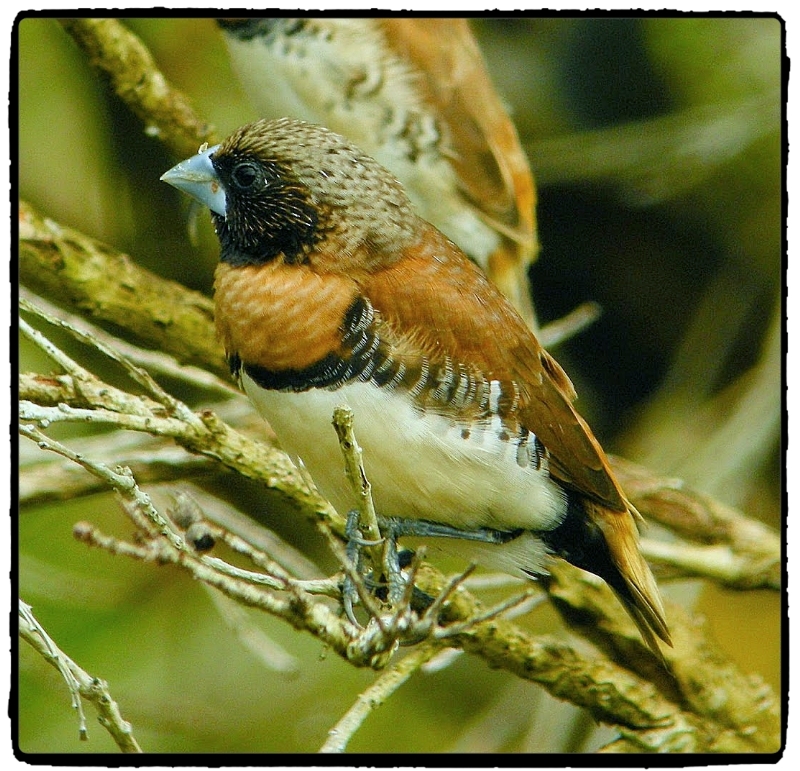 This is a busy day with extraordinary diversity of habitats from lowland tropical rainforest to dry savannah. After an early morning walk down Stewart Creek Road we drive up the coastal range on to the Tablelands to Julatten to check in to Kingfisher Park, a specialist birders lodge.

We are staying for 2 nights so the itinerary will be determined by the weather. If fine weather is forecast we will  have a complete change of habitat by travelling a relatively short distance in to dry savannah country near Mt Carbine to look for Australian Bustards, Great Bowerbird, Squatter Pigeon, Pale-headed Rosella, Galah, Black-throated Finch, Apostlebird, Pied Butcherbird, Black-faced Cuckoo-shrike, White-throated Honeyeater, White-cheeked Honeyeater, Rufous Whistler, Bower’s Shrike-thrush,  White-throated Treecreeper, Black Kite, Little Eagle, Square-tailed Kite and Wedge-tailed Eagle.

En-route in both directions we will stop at Sides Road to look for Blue-faced Parrot Finch, Lovely Fairy-wren and Grey-headed Robin.

Back at Kingfisher Park Platypus can be seen in the creek and there are many birds species in the lodge grounds including Noisy Pitta, Yellow-breasted Boatbill, Pied Monarch, Spectacled Monarch, Pale Yellow Robin, Grey-headed Robin, Little Shrike-thrush, Yellow-spotted, Graceful, McLeay’s and Scarlet Honeyeaters.

Before dinner we will look for Barn Owls in a nearby park and after dinner spotlight around the grounds for nocturnal birds and mammals.

As early as the light allows we drive up to the high mountain rainforests of Mt Lewis which is home to a range of species endemic to North Queensland including Mountain Thornbill, Golden Bowerbird, Tooth-billed Bowerbird, Chowchilla, Spotted Catbird, Fernwren, Yellow-throated Scrub-wren, Graceful and Bridled Honeyeater, Bassian Thrush and Pale-yellow Robin. We come back down for lunch followed by a drive around the Julatten area looking for a range of open country species including Red-backed Fairy-wren, White-naped Honeyeater, Golden-headed Cisticola, Tawny Grassbird, Brush and Pallid Cuckoo and species we may have missed the day before in the savannah. 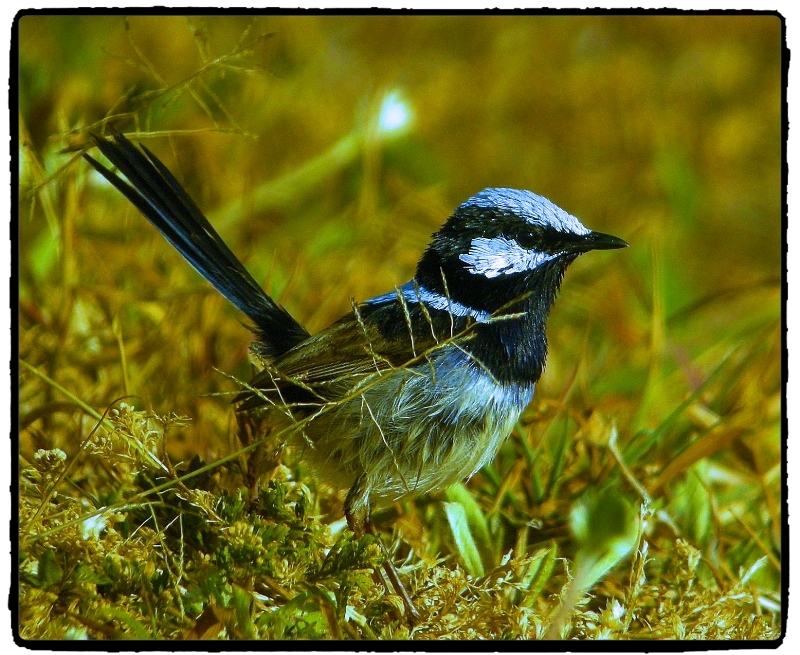 Start the day looking for Platypus in the grounds of the lodge.

In the evening we will watch a very special event, the arrival of Sarus Cranes and Brolgas at their roost in Bromfield Crater.

We drive back across the Tablelands to Kuranda where we will have another look for Cassowary and if you choose you can catch the Skyrail, a gondala that takes you over the top of the rainforest canopy, back to the lowlands near Cairns.  En route from the Tablelands we visit Davies Creek National Park to look for White-browed Robin and Rufous Owl.

Back in Cairns for 1 night.

Depart Cairns on an early flight for Brisbane. From the airport we start birding with a visit to the Port of Brisbane for Mangrove Honeyeaters and Chestnut Teal and other water birds then to the Lytton Manly Mangrove boardwalk for Leaden and Satin Flycatchers and Superb, Variegated and Red-backed Fairy-wrens. This is a rich area close to the airport and it is not uncommon to see 40 to 50 species in these two locations. At nearby locations Baillon’s and Spotless Crakes, Little Bittern and Comb-crested Jacana are possibilities. Travel to Lamington NP and en route look for Little and Long-billed Corellas, Galah and Sulphur-crested Cockatoo.  Visit Sharp Park near Canungra to look for Platypus and a range of bird species including Figbird, Oriole, Noisy Friarbird, Azure and Forest Kingfishers, Kookaburra, Pale-headed Rosella, Buff-banded Rail, Double-barred Finch, Wood Duck and Yellow-tailed Black Cockatoo. 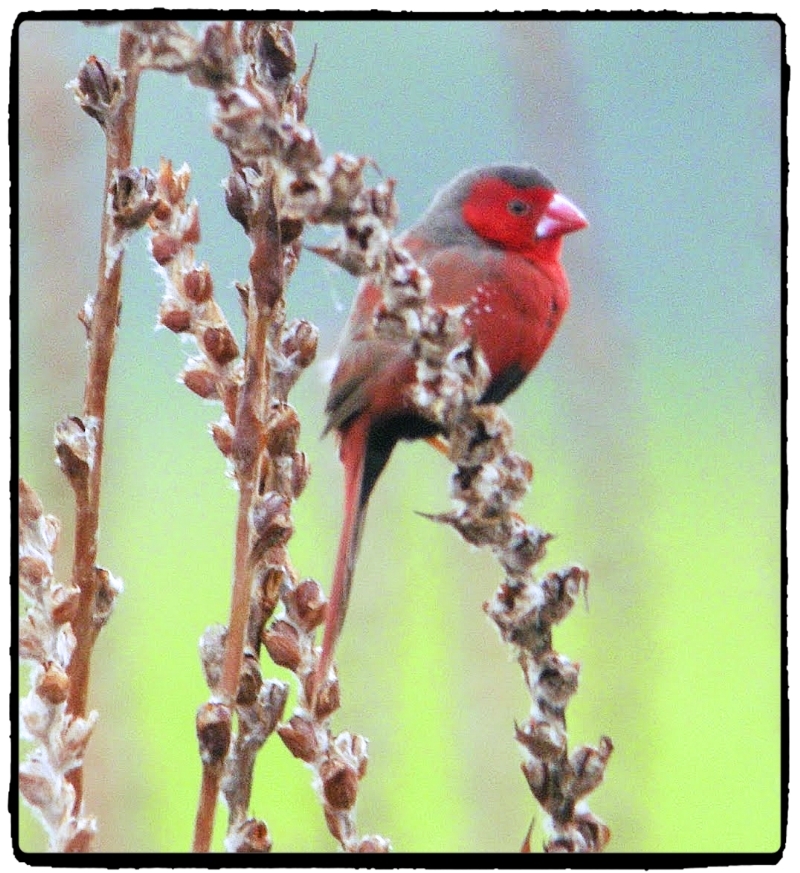 After dinner look for nocturnal animals including mammals (possums, bandicoots and pademelons) and Tawny and Marbled Frogmouths.

Early morning birding before departing O’Reillys after breakfast  for the trip back to Brisbane via birding locations in the Lockyer Valley  that should add a few species including Grey Crowned Babbler, Blue-billed Duck and possibly Musk Duck.

Depart Brisbane for Sydney, transfer from airport to hotel. Lunch and an introduction to Sydney, its natural environment and various bird habitats. We then commence with a visit to the Royal Botanic Gardens and a harbour foreshore walk to the Opera House. Characteristic local species include Sulphur-crested Cockatoos, Rainbow Lorikeets, Australian Magpie, Masked Lapwing, Cormorants and the chance of Buff-banded Rails and Powerful Owls. 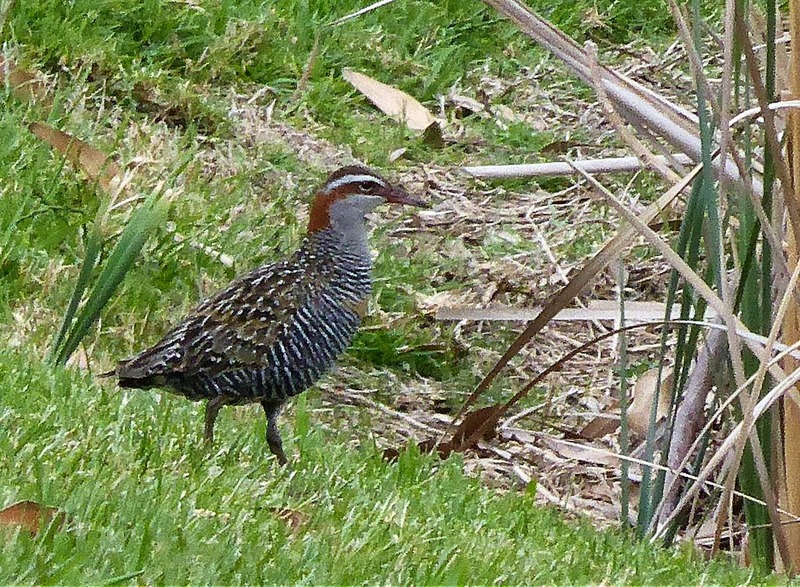 We conclude the day with a ferry trip to Manly, enjoying the sights of Sydney harbour and its resident coastal bird species, with the likelihood of Little Penguins.

We drive north of the harbour to explore a variety of bird habitats, beginning at Warriewood Wetlands, which includes one of the best coastal swamp forests in Sydney. We can expect to see a variety of birds including honeyeaters, fairy-wrens, sittellas, cuckoos, waterbirds and possibly crakes and bitterns. In recent years a pair of Crested Hawks (Pacific Bazza) have also nested here.

We then travel to Long Reef, a coastal headland with an extensive tidal rock platform that attracts considerable numbers of seabirds and migratory shorebirds, including White-fronted Terns and Double-banded Plovers from New Zealand.

The day will also include a visit to some woodlands and open, or dry sclerophyll forests, regarded as Sydney’s ‘bushland’. Bird species include robins, thornbills, treecreepers and Crimson and Eastern Rosellas.

Today we travel south to the Royal National Park, the first national park in Australia and one of the oldest in the world, established in 1879. The park contains a variety of habitats and we visit several of these including a significant strip of sub-tropical rainforest as well as an extensive area of heathland. 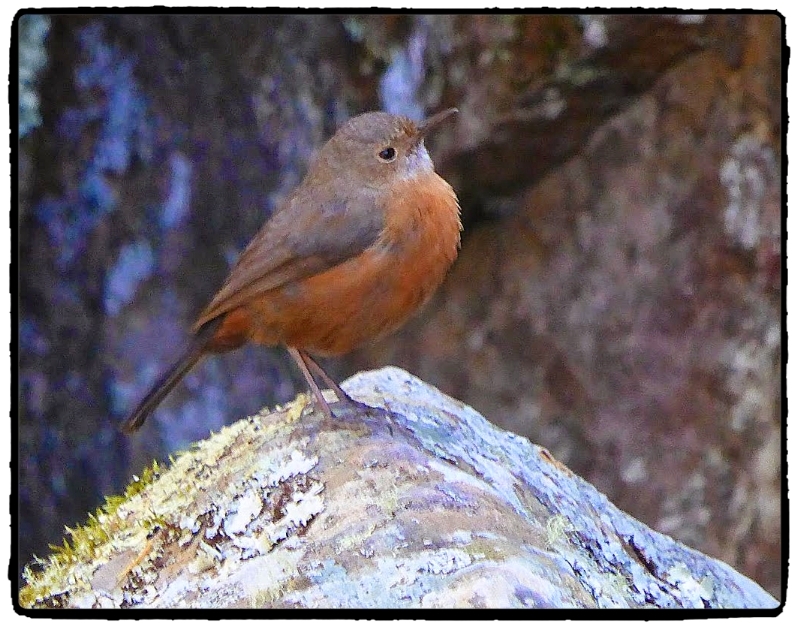 Depart Sydney to drive inland to the Blue Mountains, visiting several birding locations. These include Bicentennial Park - with migratory shorebirds, numerous waterbirds and other species such as Red-necked Avocet - and locations in the Blue Mountains where bird species include Gang-gang Cockatoos, Red-browed Treecreepers, Flame and Scarlet Robins, honeyeaters and possibly Glossy Black-Cockatoos.

After looking for species that we have missed in the Capertee and Blue Mountains areas we return to Sydney.

Today we drive south of Sydney along the coast to the area of Barren Grounds Nature Reserve. Despite this unwelcoming name, this is a heathland area with good birds, including the critically endangered Eastern Bristlebird and the Ground Parrot, one of only five ground-dwelling parrots in the world. The area is also good for Southern Emu-wrens, Pilotbirds, Top-knot Pigeons and Crescent Honeyeaters. During the day we will also visit areas of the coastal escarpment, where Grey Goshawk are likely, and a coastal lagoon with large numbers of seabirds and migratory shorebirds. 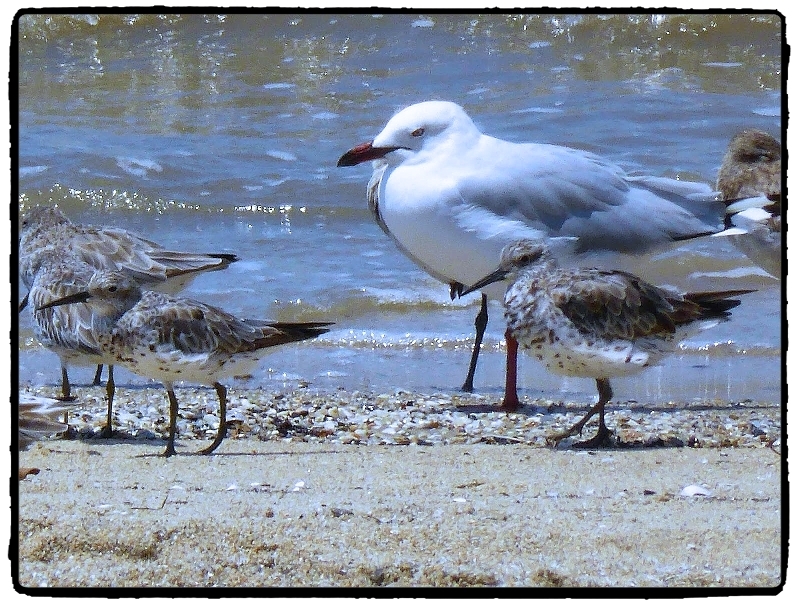 Today is an all-day optional pelagic trip from Sydney to Browns Mountain, a seamount 50 km east of Sydney. The waters around the seamount are some 600 metres deep and the upwelling at the seamount attracts a range of sea-life and pelagic birds. We should encounter a plethora of seabirds including Black-browed, Shy and Wandering Albatross, Great-winged Petrel and possibly Black Petrel, Wilson’s Storm-petrel, shearwaters including Wedge-tailed, Fluttering, Short-tailed, Hutton’s and Flesh-footed, and Arctic, Pomarine and Long-tailed Jaegers. A range of dolphin species and seals are also regularly seen.